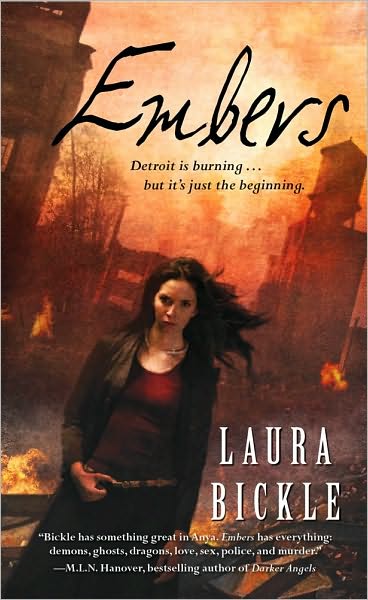 Embers by Laura Bickle
Publisher: Simon and Schuster (Pocket)
4/5
Synopsis:
Truth burns.Unemployment, despair, anger—visible and invisible unrest feed the undercurrent of Detroit’s unease. A city increasingly invaded by phantoms now faces a malevolent force that further stokes fear and chaos throughout the city.Anya Kalinczyk spends her days as an arson investigator with the Detroit Fire Department, and her nights pursuing malicious spirits with a team of eccentric ghost hunters. Anya—who is the rarest type of psychic medium, a Lantern—suspects a supernatural arsonist is setting blazes to summon a fiery ancient entity that will leave the city in cinders. By Devil’s Night, the spell will be complete, unless Anya—with the help of her salamander familiar and the paranormal investigating team—can stop it.Anya’s accustomed to danger and believes herself inured to loneliness and loss. But this time she’s risking everything: her city, her soul, and a man who sees and accepts her for everything she is. Keeping all three safe will be the biggest challenge she’s ever faced.

REVIEW
Anya is a Lantern, which is a type of medium that can devour ghosts. She’s also an investigator for the Detroit Fire Department, and a series of arsons has the city alarmed and Anya and the Department on their toes. She also spends time helping out the DAGR, or the Detroit Area Ghost Researchers, when they have a particularly nasty ghost on their hands. As Anya digs deeper into the arsons plaguing the city, she discovers a powerful man who may hold secrets that could affect Anya forever.

This was an unusual and engaging urban fantasy, and I found myself unable to put it down! In Anya, Ms. Bickle has given us a heroine to root for. She’s not the usual type that you see in these kinds of fantasies. She’s very serious and her loneliness tends to temper everything she does, including getting involved with a man that could very well destroy her, even though he sees through to the very core of her being. One of the highlights of Embers is Anya’s familiar, Sparky, a salamander that she wears around her neck as a necklace and only she and certain others can see when he comes to life. He’s quite like a mischevious puppy; always getting into all things electrical and fierce in his loyalty and protectiveness of Anya.Embers, in spite of the title conjuring flames and ash, was a breath of fresh air for the genre and an immensely enjoyable read! Keep an eye out for my review of Sparks, the second Anya Kalinczyk adventure from Laura Bickle!