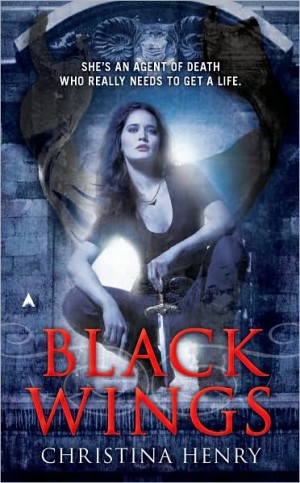 As an Agent of Death, Madeline Black is responsible for escorting the souls of the dearly departed to the afterlife. It’s a 24/7 job with a lousy benefits package.

Maddy’s position may come with magical powers and an impressive wingspan, but it doesn’t pay the bills. And then there are her infuriating boss, tenant woes, and a cranky, popcorn-loving gargoyle to contend with.

Things start looking up, though, when tall, dark, and handsome Gabriel Angeloscuro agrees to rent the empty apartment in Maddy’s building. It’s probably just a coincidence that as soon as he moves in demons appear on the front lawn. But when an unholy monster is unleashed upon the streets of Chicago, Maddy discovers powers she never knew she possessed. Powers linked to a family legacy of tarnished halos.

REVIEW
Maddy is an Agent of Death, who’s job it is to lead souls away from the earthly plane immediately after death. Where they actually go, she’s not sure (the powers-that-be don’t share that with the agents). Evidently it’s on a need-to-know basis. All Maddy knows is that she’s got rent due and an infuriatingly cranky boss to deal with. Things are about to get a lot more interesting for Maddy, though, when a handsome tenant, Gabriel, moves into the building she owns.Before she knows it, she’s got demon problems and has powers that are becoming increasingly harder to control. Soon, she’ll discover a whole new world out there, one of angels and demons, and nephilim, the offspring of the fallen and humans. She’ll also discover an explosive secret about herself that will change her life forever!

Maddy is a charming heroine, and I found myself rooting for her, as she found herself thrown into situations beyond her control. Strong and smart, but also vulnerable, I enjoyed following Maddy as she discovered her newfound power, and discovered the secrets of her past and her family. I really liked Christina Henry’s take on angel and demon lore, and Maddy’s friend and protector, the gargoyle Beezle, who steals quite a few scenes. Ms. Henry also has lots of fun with Death as a bureaucracy, complete with pencil pushing and tons of paperwork. Black Wings was a very enjoyable urban fantasy, and I look forward to the next in the series, Black Night!