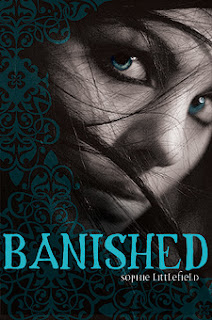 There isn’t much worth living for in Gypsum, Missouri, or “Trashtown,” as the rich kids call the run down neighborhood where sixteen-year-old Hailey Tarbell lives. As far as Hailey knows, she’s never going to belong. Not with the kids at school or with her cruel, sickly grandmother, who keeps their household afloat by dealing drugs out of the basement.
But Hailey can’t help the feeling that she has some kind of gift, or curse, that makes the other kids shy away from her. Hailey is drawn to those in pain, those who need to be healed. And when her dog Rascal is hit by a car, Hailey’s gift is revealed. Not only can she heal, she can bring the suffering back to life. And Hailey will soon find out, this power to heal is just the beginning . . .
MY REVIEW

16 yr. old Hailey Tarbell lives with her Grandmother in the small town of Gypsum, Missouri. She lives in a section dubbed Trashtown, and is considered even lower than the town’s poorest kids. Her grandmother deals drugs, and the people that come in and out of Hailey’s house are, well, unsavory, to say the least. Hailey looks forward to getting out of Gypsum, taking Chub, her 4 yr old charge, with her, and starting a life somewhere far away, when something happens that will change her life forever.

Hailey is one of the Banished, a group of people with very special powers, and she will soon learn the secret of her power, and her family, in Sophie Littlefield’s wonderful YA debut. I read Banished in one sitting, it was that good! Hailey’s world is gritty, violent and terrifying, but always there is a speck of hope, just waiting to be discovered, off in the distance. When Hailey’s Aunt Prairie comes to claim her, more secrets are revealed, and an even bigger threat is looming. Someone wants to use her power to a horrible end, and it’s a race against time to stop a plan that’s beyond evil. Hailey is a strong heroine, and I rooted for her from start to finish. Plenty of action will keep you glued to the pages, and hints of possible romance along with an intriguing mystery add depth to the story. Don’t miss the next book in the series, Unforsaken, due in October!
Read my interview with Sophie!
Purchase Banished