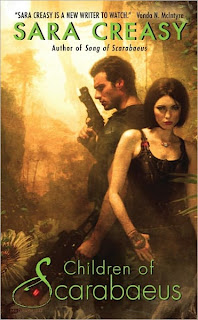 The crib is everywhere . . .
Edie Sha’nim believes she and her bodyguard lover, Finn, could find refuge from the tyranny of the Crib empire by fleeing to the Fringe worlds. But Edie’s extraordinary cypherteck ability to manipulate the ecology of evolving planets makes her far too valuable for the empire to lose. Recaptured and forced to cooperate—or else she will watch Finn die—Edie is shocked to discover the Crib’s new breed of cypherteck: children. She cannot stand by while the oppressors enslave the innocent, nor can she resist the lure of Scarabaeus, the first world she tried to save, when researchers discover what appears to be an evolving intelligence.
But escape—for Edie, for Finn, and for the exploited young—will require the ultimate sacrifice . . . and a shocking act of rebellion.
MY REVIEW
*Please note: My review is relatively spoiler free, but assumes you’ve read Song of Scarabaeus. It might be a bit confusing if you haven’t:)
Children of Scarabaeus picks up a week after Song of Scarabaeus, with Edie slowly withering away, her body deprived of the drug she needs to stay alive: Neuroxin, distilled from the native plantlife of her homeworld, Talas. If Edie dies, so will Finn, as the chip inside of his head that links them explodes. Aided by Cat Lancer, pilot and ally, she and Finn are on the run from the Crib, who wants Edie back at any cost. They plan to fly to the Fringe, and use the cryptoglyph Finn is carrying in his head to help liberate the Fringe worlds from their reliance on Crib technology.
The trio hitches a ride on a ship filled with migrant workers in cryosleep, waiting to be awakened when someone needs their particular skill. Edie is understandably terrified at the idea of being put into cryosleep for an indefinite period, but Cat sets the timer for 15 months, and Edie creates bios and skillsets for them so that they might be awakened earlier. Unfortunately, the Crib finds Edie, and 13 months after going into cryosleep, she finds herself on a Crib vessel, at the mercy of Natesa, the woman that can force her to use her skills to further the plans of the Crib and systematically turn ecosystems across the universe into the “Terran ideal”. Edie discovers that Natesa is training a new batch of children to see “an ecosystem in flux as damaged, and the Terran ideal as the cure,” and when she realizes that they aren’t afraid to use the children for more nefarious means, the stakes all of a sudden become much, much higher.
I adored Sara Creasy’s first novel, Song of Scarabaeus, and was more than eager to revisit Edie and Finn’s universe. Children of Scarabaeus is just as good, and I think I liked it even more than the first! The passion between Edie and Finn burns through the pages, and the frustration they feel as the mental leash keeps them from consummating their relationship is palpable. I rooted for Edie and Finn from the start, and Finn’s need to protect Edie, as well as her desperation to keep him close to her and safe makes everything they go through that much more urgent. When Natesa finds the infojack that created the leash and is ordered to cut it, Edie is terrified this could kill Finn, not to mention the thought that he might choose to leave her behind. The real shocker comes when Edie learns of widespread famine in the Central world, and the project that she’s assigned to is designed to prop up these worlds for a limited amount of time, after which the ecosystems will completely fail. How can Edie possibly stop this from happening, without killing herself and her friends in the process?
I love the science and world building in these novels. When Edie jacks into the datastream, the pathways of an ecosystem are like “music”, and you can almost visualize the zipping, soaring colors as Edie works her magic. The author’s descriptives are also so good that a relative sci-fi newbie (like me) can easily keep up with the narrative without feeling out of the loop. I’ve had this happen before with “hard” sci-fi, and it left a bad taste in my mouth. Not that there’s anything wrong with the genre, but I ended up concentrating so hard on trying to understand a fraction of the science that I couldn’t enjoy the story. Not so with Sara Creasy’s work. And the story is the best thing about these books. Wonderful character development, a lush, fleshed out environment, suspense, romance, and a multi-layered storyline makes for great reading! Sara Creasy is an auto-buy for me, and I’ll look forward to getting my hands on her next book!
Order Children of Scarabaeus: Amazon | Barnes and Noble
Stalk the author: Website | Twitter