Fantasy Interview and Giveaway With Yvonne Navarro, author of Highborn!

Interview and Giveaway With Yvonne Navarro, author of Highborn!

Kristin •March 3, 2011Fantasy, Urban Fantasy
Highborn, the new urban fantasy by Yvonne Navarro, was one of my favorite recent reads, so when she agreed to do an interview for me, I was so excited! She’s also agreed to give away a copy of Highborn to one lucky winner!

**GIVEAWAY DETAILS**
Giveaway is NOW CLOSED!
Thanks to everyone that entered!
My Bookish Ways: Yvonne, thank you so much for stopping by the blog! It’s a pleasure to have you!
Yvonne: Thanks very much for inviting me.

Yvonne, I absolutely adored Highborn! For those who haven’t read it, can you tell us a bit about it?
Highborn is the story of a female fallen angel– a demon– who realizes too late that, like so many of us, she made the wrong choice. What she gave up to spend eternity in Hell is not worth it, so she decides to make a break for it, escape from Hell and figure out how to earn redemption and a return to her place as a true angel in Heaven.
Brynna has to basically “learn” to be human. What kind of research did you do for her character?
I talked to a couple of demons… uh… okay, maybe not. Really, none. I just put myself in her place, going on instinct as to how I would act if my circumstances were exactly like hers. That’s really what I do for all my characters, and I think it’s the key to making them believable. I see the situation, the circumstances, the world, from their eyes, and I just recount it. Hopefully I haven’t actually been one of these people or creatures in a past life, because I seem to be pretty effective at it!
When you started writing Highborn, did you have an idea of how many books you’d like to write in the series, or did it just take off on its own?
No idea, other than it was too big of a story to tell in just one book. It’s a little hard to redeem a demon who’s been corrupting human souls for thousands and thousands of years in a book that spans maybe a month. The second book is CONCRETE SAVIOR, which comes out in June 2011. I’m still waiting on word from Pocket Books about the third book, JERICHO GIRLS, and I have preliminary notes on a fourth, called OUTCAST.
Is there anything you absolutely need in order to write, that gets the creative juices flowing?
Not really, although I am one of those OCD types who likes to have everything out of the way– chores, laundry, errands, etc. Yes, all that stuff that the pros tell the new writers NOT to worry about. There’s a reason they do that, and namely because it’s really difficult to do.
When you’re not writing about kick-ass fallen angels, what do you like to do to unwind? 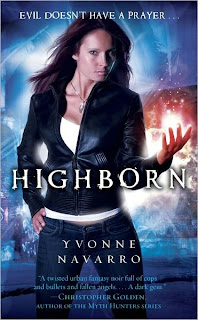 I have way too many things that I like to do and not enough time in the day. My second creative love is painting. As a child, I I loved to draw and thought I would grow up to be an artist but I never had any training in it, a fact that never stopped me from buying and collecting a lot of art supplies I had no idea how to use. A couple of years ago as part of my ever-ongoing attempt to complete my Fine Arts Degree (no, I’m still not there), I took my first college painting class. Wow. Now, with a couple of classes and some workshops in the experience bank, I’m having a wonderful time and have turned those art supplies into a fully outfitted art studio (which I still don’t have enough time to enjoy). And like any writer, I love to read, something else I’m forcing myself to rework back into my life. And, and, and…!
Can you tell us something about yourself that a lot of people may not know?
Gosh, with Facebook a lot of me is the proverbial open book now! There’s really nothing juicy (that I’m willing to share, anyway), but I do type 114 words a minute and take good old-fashion Greg Shorthand… and both are self-taught. 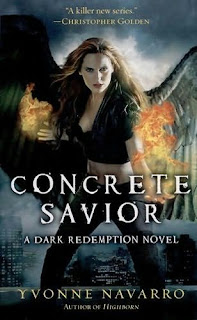 The second novel in the Dark Redemption series, Concrete Savior, comes out this year. Can you give us a bit of a teaser?
CONCRETE SAVIOR continues the story of Brynna as she tries to figure out how to find forgiveness for her former evil ways while learning to live among the humans she once blamed for her life as Astarte, Lucifer’s favorite consort. In HIGHBORN Brynna struggled to make a life for herself and learned one way of potentially earning at least a measure of forgiveness by protecting half-human, half-angels. In CONCRETE SAVIOR she learns that not only are humans worth saving, they are capable of something she never thought possible: loving even a creature such as herself. I’ll get an excerpt up on my website (www.yvonnenavarro.com) pretty soon.
Any upcoming projects or news that you’d like to share?
Alas, nothing I can really talk about right now as far as writing project. But if any of your readers live in the Austin, Texas area, catch me at the World Horror Convention at the end of April and say hello. I’ll also be at the Phoenix ComiCon in Tucson at the end of May, plus a few other places in between. Again, drop by the website and check out the “Appearances” page.

Visit Yvonne at her website!
Read my review of Highborn