Fantasy Interview and Giveaway with Dakota Banks, author of the Mortal Path Series!

Interview and Giveaway with Dakota Banks, author of the Mortal Path Series! 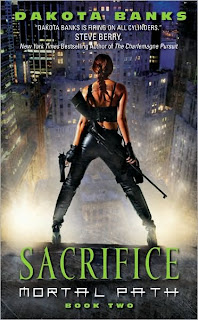 **Giveaway Details**
Fill out THIS FORM to enter.
Open Internationally.
Must be at least 13 to enter.
Ends 4/4/11

My Bookish Ways: For those that haven’t read the Mortal Path books, can you tell us a bit about them?
Dakota Banks: In the 1690s, Susannah Layhem was a wife and healer, and about to become a mother for the first time. It’s the height of the Salem witch hysteria, and Susannah is accused of being a witch because she is so knowledgeable about using herbs for healing. The real reason is that a jealous woman wants Susannah out of the way so she can move in on Susannah’s husband. Embittered by her betrayal, Susannah accepts an offer from an ancient Sumerian demon to remain alive and Ageless to carry out his orders as an assassin. She does so for hundreds of years, living a decadent life, caring for no one. Gradually her conscience begins to haunt her until she finally defies the demon. This starts her on the Mortal Path. She takes a new name as Maliha Crayne for her new quest. To redeem her soul, she needs to balance lives she’s taken with lives saved. If she dies before doing so, she’ll end up as the demon’s plaything in hell (take it from me, that is not good). She has to learn what it’s like to be human again, by reaching out in friendship and struggling with love that she’s closed her heart to for 300 years. In addition, she’s searching for shards of a diamond lens left by a Sumerian god that will allow her to eliminate all the Sumerian demons left on Earth.
It’s obvious that a lot of research goes into your novels. How long does it usually take you to complete a novel from start to finish? Do you do all of your research yourself?
I do all of the research myself, and the books are very research-intensive, from information about the Sumerian pantheon of gods and goddesses (Sumeria was located where Iraq is today) to weapons both ancient and modern. I’d like to say that all the martial arts in the books come from experience, but sadly no. I have expert advisors, but my own venture into martial arts has been limited to sticking some throwing stars into a tree. I also like to take Maliha to locations around the world when searching for diamond shards or working on her current case. I really believe in providing the reader with an authentic experience, with everything from locations to action to emotions to paranormal abilities, inside a consistent world that I’ve built. From conception of the idea to the first book published was almost five years, due to piecing together the world where Sumerian gods and demons survived to the present day and developing characters to populate that world. It takes about nine months to write a Mortal Path book, and then it goes into the editing and production cycle. I’m not in a hurry to rush them out. I want to get everything right. 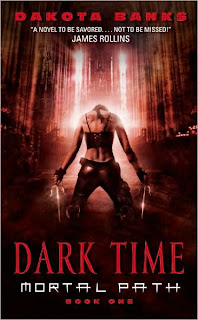 Are there any particular authors that influenced you growing up?
When I was growing up, I favored science fiction. I read Isaac Asimov, Ray Bradbury, Frank Herbert, J.R.R. Tolkien, and Orson Scott Card. These authors put great care into world-building, and I both admired that and studied it. My first books (written as Shirley Kennett) used virtual reality as an experiment in this kind of world-building. But that wasn’t enough for me! I wanted to create a world that you or I would blend right into, except that there’s an undercurrent of activity we know nothing about. As far as the Mortal Path books, it’s a good thing that we don’t know about it, because Maliha is the only thing standing between us and demons intent on chaos and destruction.
Did you always want to write?
Always! When I was eight years old, I had a story published in my school newspaper. I figured that was it–my career was launched, let the money roll in. I wrote all through high school and college and got very nice, handwritten rejection letters, the key word there being rejection. I got on with living, periodically having fits of story writing, but I had a lot of living to do before I said: “It’s now or never. Give it a shot.” And here I am, eight books later with a ninth on the way.
Is there anything that you absolutely have to have in order to write?
I assume you mean besides the Internet and my laptop. Hmm. Coffee. One or both of my cats on my desk. As few distractions as possible. My writing day is roughly 11pm to 6:30am. I love the dark, quiet house that totally frees my imagination, and I love to see the sunrise at the end of my writing session. I have a nickname of Night Writer.
When you’re not writing about kick-ass chicks, what do you like to do to unwind?
Mostly sleep. 🙂 I like to go out with my husband and talk over all the usual stuff plus story ideas (he is marvelous at getting me out of corners I’ve written myself into) over a late lunch or while walking in a park. I don’t have time for an exciting social life, but as long as I can connect with family I’m okay. I do love photography, though I’m not very good at it. I can’t tell you how many photos I’ve taken with my finger or my shadow in the picture. Every once in a while I manage a shot that’s halfway impressive.

Any teasers you can give us for Book 3?
Book 3 has a working title of Payment in Blood (and may change when my editor gets the manuscript) and is due out April 2012. There’s been extra time between books 2 and 3 because of family health concerns, which my editor was kind enough to work with me about. In book 3, one of Maliha’s group of close friends is in mortal danger, and she is ripped apart emotionally in her efforts to help.
Do you have any set plan for the number of books in the Mortal Path series?
There are seven diamond shards in the lens that will destroy all the demons, so it’s logical that there would be six or seven books to bring that to a conclusion. Honestly, my editor has something to say about that, and will let me write as long as the books are selling well. (Hint, hint.)
Any future projects or news you’d like to tell us about?
I have notes for another paranormal series (don’t say the Z word), and a novel about dreaming.

Read my review of Sacrifice