Interview and Giveaway with Chris Grabenstein!

Kristin •March 7, 2011Suspense, Young Adult
I recently asked the wonderful (and busy, and generous) Chris Grabenstein, author of the Ceepak mystery series and the YA Haunted Mystery series, if he would be so kind as to answer a few questions for me. He graciously agreed, and I’m beyond thrilled to have him on the blog!
I’m also offering a copy of The Crossroads, the first Haunted Mystery novel, to one lucky winner!
**GIVEAWAY DETAILS** 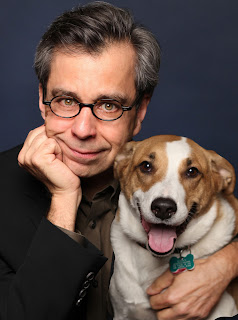 My Bookish Ways: Chris, thank you so much for stopping by the blog! I’m a huge fan, and so thrilled to have you here!

Chris Grabenstein: Well, I’m delighted to be here, if only in my electronic form.
For 20 years, you wrote commercials for some of the largest advertising agencies in the country. During that time, did you always picture yourself writing a novel, or did you just suddenly get an idea and go with it?
Oh, no. I never thought I could write a novel. They are so loooong and, in the commercial world, I was used to writing stories of 70 words or less (that’s how many words you get if you talk wall-to-wall in a 30 second commercial). Of course, my first boss in advertising, James Patterson, had done pretty well with a second career writing books. So, when I quit advertising in 2001, I initially thought I would write movies, since our commercials were basically itty-bitty baby movies and I had co-authored a TV movie of the week with a college buddy back in 1986. That movie, THE CHRISTMAS GIFT, starring John Denver, is still on TV every holiday season. Usually on the Hallmark Channel. Usually about 3 or 4 in the morning. Last year, my partner and I split $50 in residuals.But, I digress. I didn’t think I could actually write a NOVEL until about 2003 when I read Stephen King’s ON WRITING. It gave me the courage to try writing 1,000 or more words a day every day. At the end of five months, I had a novel-sized story. Which was never published.Neither was my second book. Or my third. TILT A WHIRL, my “first” book was actually my fourth.
You were the first writer hired after entering a contest that James Patterson ran for aspiring writers. I can’t imagine how exciting that must have been! How did you celebrate? 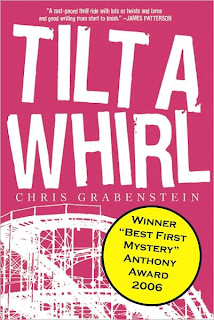 Gosh, I don’t remember celebrating at all. How weird is that? It was a very busy year, 1984. I got married, moved, changed careers. I guess there was so much change swirling around me, I didn’t take time to smell the assorted flowers. I also took a pay cut! I had been supporting my improv acting lifestyle by working as a temp secretary. Junior copy writers got paid less than temp secretaries! That test, of course, changed my life. Not only did I get to work with Mr. Patterson and learn all sorts of secrets of writing to earn your audience’s attention, I went on to have an exciting, 17 year world-traveling, movie-making career in advertising, ending up as an Executive Vice President/Group Creative Director at Young & Rubicam, one of the largest ad agencies on Madison Avenue. By then, I was making more than a temp secretary. Barely.
For those that haven’t read your John Ceepak mystery series, can you tell us a bit about it?
John Ceepak is a by-the-book, ex-MP who will not lie, cheat, steal or tolerate those who do. He takes a job on the police force “down the shore” in Sea Haven New Jersey where an old army buddy is the chief. Since he will not drive (due to a traumatic incident he witnessed in Iraq), he is teamed with a 24-year old part time summer cop named Danny Boyle (who only took the job with the SHPD because “chicks dig the cop cap”).Danny is a wise-cracking slacker when the series starts. He, of course, grows up and learns what it means to be a man as the series progresses. Ceepak learns what it means to be a friend.It’s neat that Book #6 in the Ceepak series ROLLING THUNDER was just nominated for the Left Coast Crime convention’s “Watson Award” for best sidekick.

Did anyone in particular inspire you in creating the deeply moral John Ceepak?

Physically, the muscular Ceepak is based on my nephew, Dylan, who served with the Marines in the first Gulf War. His soul comes from my friend FDNY Fire Captain Dave Morkal — the kind of guy who runs into burning buildings when everybody else is running out. Danny is more or less me, only several decades younger.

What were some of your favorite writers or books when you were growing up?
When I was young, I warped my mind and developed my “satiric” sense of humor by devouring Mad Magazine and Mad books. I remember I used to save my money all year and then buy about six new Mad books every summer.As I got a little older, I fell in love with the short stories of O. Henry and Edgar Alan Poe. I also read a ton of Stephen King books and classic mysteries by Agatha Christie.

Your YA novels, The Crossroads and the Hanging Hill both won the Agatha Award, and your newest book, The Smoky Corridor, has been received with high praise. What made you decide to try your hand at a young adult series?
I wanted to write something that my nieces and nephews as well as the children of friends could read (since the Ceepak books have what HBO calls “adult language and adult situations”). THE CROSSROADS started as a 120,000 word manuscript targeted at adult readers. When an agent expressed interest in the story as a book for Middle Grades readers, I cut 70,000 words, trimmed it down to 50,000 and found the story’s true heart in my eleven year old hero Zack Jennings who has to conquer his fears and use his talents to set right something that was made wrong fifty years ago.When I was writing the YA version of THE CROSSROADS, I had a blast and realized that I liked writing for kids as much (if not more) as I enjoyed writing for adults.Editors and agents told me I had a good “middle grades voice.” I guess I just tap into my inner eleven-year old.And I still read Mad magazine.

Anything you absolutely have to have on hand in order to write?
Coffee, music, water, a dog to walk, and a cat or two.
When you’re not writing, what do you like to do to unwind?
Think about what I might write next. I do that while running around Central Park or cooking dinner. I also love watching movies, especially ones that still surprise me, even though I know the tricks and twists of screenplays.
Is there any news of upcoming events or releases that you’d like to share with us?

I have a lot of exciting school trips lined up for the rest of the year (about one a week) and will be appearing with Walter Dean Myers and Julie Halpern at the YALSA’s Reluctant Readers Preconference in New Orleans right before the ALA convention starts. http://americanlibrariesmagazine.org/news/ala/join-walter-dean-myers-julie-halpern-and-chris-grabenstein-yalsa-s-reluctant-readers-preconI will also be the Guest Author at the Lorain County Young Authors Program in Ohio this May.

I’ll also be going to some of the big Mystery Conferences: MALICE DOMESTIC and BOUCHERCON.Look for the next Haunted Mystery THE BLACK HEART CRYPT in August, 2011.

And, big news, my second Middle Grades series, RILEY MACK AND THE OTHER KNOWN TROUBLEMAKERS will debut from HarperCollins in January 2012. It’s a Mission Impossible style caper; an Ocean’s Eleven starring eleven-year-olds.

*Grab a copy of Tilt-A-Whirl (John Ceepak #1)
*If you have a Nook, you can grab Tilt-A-Whirl for a STEALHERE
*Visit Chris at his website! I urge you to head on over to his website if you have a chance! Lots of cool stuff to look at, including a Resort Map for the Ceepak Series!
*Please visit Visitation Hospital to learn about a charity that is close to Chris’ heart. You can read more about it on his site HERE