Interview and Giveaway with Carolyn Crane!

Kristin •March 9, 2011Fantasy, Urban Fantasy
Today on the blog, I have the lovely and talented Carolyn Crane, author of the Disillusionists Trilogy, and one of my fave urban fantasy writers!
One lucky winner will also get their choice of Mind Games or Double Cross (SIGNED!) 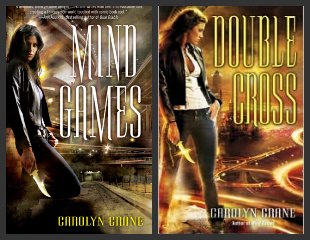 **Giveaway Details**
Giveaway is now closed! Thanks to everyone that entered!

Please welcome Carolyn to the blog! 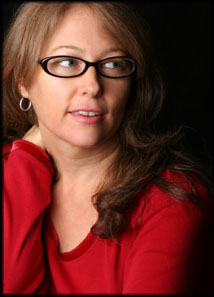 My Bookish Ways: Carolyn, thank you so much for stopping by the blog!
Carolyn Crane: Hi! Thanks so much for inviting me here.
For those that haven’t read Mind Games, can you tell us a bit about it?
My heroine, Justine Jones, is a hypochondriac who is crippled by fear, and her life sucks, but everything changes when a handsome mastermind named Packard peers into her soul and invites her to join his psychological hit squad. At first, Justine enjoys being part of the thrilling world of neurotic vigilantes who battle Midcity’s paranormal criminals. But little by little, she begins to uncover strange secrets. And she also falls for one of her most dangerous targets. uh oh!
While reading Mind Games, I couldn’t help but feel like I was inside the mind of a hypochondriac at times! The detail involved and the intricacies of the psychosis were amazing! Are you sure you don’t have a psychology degree?
Aww, thank you! No, I do not have a psych degree, but between my family and friends and me, I think I have experience with most major neurotic behaviors. Also, I’m interested in how the mind works, and how emotions can feel so real, and so very powerful. In everyday life, I think people really do use emotions as weapons in a roundabout way, so it wasn’t too hard a stretch to imagine them actually being weaponized in a UF scenario.
I enjoyed the concept of the Highcaps and also the sort of comic book noir of Midcity. What made you decide to go with something like that instead of hopping on the vamp/were/ghostie train? 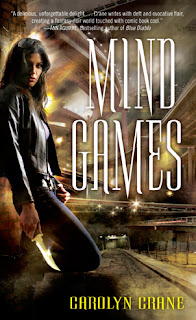 What came first was the idea of a psychological hit squad, and it felt urban fantasy. But as I thought about it and played with it, it never felt like a vampire/were/ghostie tale, you know? To be honest, the X-Men were a little bit on my mind, as well as classic shows like Get Smart and Batman, as well a the old gumshoe detective/crime thriller tradition.

When you started Mind Games, did you already know that you’d like the series to be a trilogy, or did that come about later?
Oh, great question. I went with a trilogy because I’m writing in first person – I knew I didn’t want to stay in one person’s head for too long. And, a romance arc is really important to me – I like a satisfying love resolution, and you can’t really have that over an 8 book series with the same narrator, unless you:1. hold off on the sex and love or 2. Do a lot of hero musical chairs or have a major triangle that keeps churning 3. Are just amazing at keeping the sexual tension between two peopleNone of those options worked for me. Plus, a trilogy sounded cool! (LOL it’s true, that was part of the reason.)
Do you plan on completing a story arc with the trilogy and writing more in the series?
The story arc with Justine and Midcity will be complete after book #3 (likely out December). However, I’m doing a spin off novella for an anthology project this spring, and I may do another related short or novella; I’m itching to give Simon a proper story.
In your bio it says you done everything from waitressing to freelance writing. What made you finally decide to write a novel? 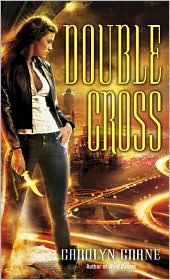 The truth is, I decided to write a novel like 10 years ago! And I wrote one, then another and another. Yes, I have 3 unpublished novels. Mind Games is the first published one. As for jobs, I always wanted to write and be an author, but I knew you really couldn’t make a living at it, so I spent a lot of time developing a compatible “other job,” and I was lucky to be able to break into advertising and freelance writing – it’s really flexible unless you have a major deadline. Sometimes I get ideas from the stuff I write, too. I wrote a website about a high-tech product for a client last fall and repurposed some of the stuff I learned from it for some of the crazy inventions characters use in Double Cross.
Is there anything that you absolutely need in order to write, or get the creative juices flowing?
I write my first drafts longhand, and I have these two refillable pens, and I need to use one of them. (In a pinch, I can use certain other pens, but it’s not the same.) I often listen to music, but if I do, I must play this one Led Zeppelin CD first, or the writing doesn’t go well. I need black tea, too, though coffee works! And, I need to daydream. A good 50% of my writing time is spent thinking and imagining scenes.
Can you tell us something about yourself that a lot of people may not know?
Before I got interested in fiction, I was really into writing humorous essays. My dream was to write books of essays that would make people laugh, just like David Sedaris. My husband also writes humorous essays, and it’s something we had in common when we first met (in fact, we used put out a little zine of our essays) but then I left him for the dark and torrid world of urban fantasy and romance! (Well, we’re still married, but I left him on an artistic level, and I never looked back! Because I love love love writing fiction!) 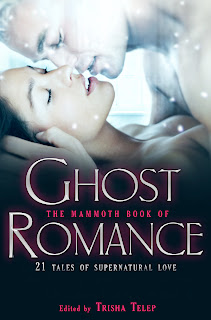 I am going to be doing that spin-off novella (about Sophia and the Monk) in a to-be-announced anthology this spring that I’m self publishing with some awesome, amazing authors (I’m designing the cover! gulp.) Also, I have a ghost story in the Mammoth Book of Ghost Romance, and book #3 hits in December. Also, I’m developing two different paranormal romance projects I’m feverishly excited about!

Thanks so much for stopping by the blog, Carolyn! It was a pleasure!
Well thanks for inviting me. I really appreciate it!