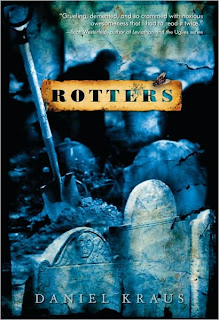 Description: Leonardo da Vinci did it, Shakespeare wrote about it, and the resurrection men of nineteenth-century Scotland practically made it an art. But none of this matters to Joey Crouch, a sixteen-year-old straight-A student living in Chicago with his single mom. For the most part, Joey’s life is about playing the trumpet and avoiding the daily humiliations of high school.

Everything changes when Joey’s mother dies in a tragic accident and he is sent to rural Iowa to live with the father he has never known, a strange, solitary man with unimaginable secrets. At first, Joey’s father wants nothing to do with him, but once father and son come to terms with each other, Joey’s life takes a turn both macabre and exhilarating.

MY REVIEW
After his mother is killed in a freak accident, 16 yr old Joey Crouch is sent to live with the father he never knew in rural Iowa.  Devastated and shell-shocked, Joey is further disheartened to learn that his father is known locally as “The Garbage Man” and lives in a filthy, smelly shack. Tormented at every turn by school bullies, Joey struggles to find his place. When he finally learns exactly what it is that his father does for a living, he is at once horrified and fascinated, and realizes his life is about to change forever.
Rotters is a hard book to classify. It’s listed as YA, but has themes that might be a bit beyond a younger reader. I would most definitely recommend it to older teens.  It will take someone with a fairly strong stomach to get through some of the passages, but the writing is superb, and Kraus’ take on teenage angst is probably a lot closer to the truth than most parents would like to think. Joey is absolutely tortured at school. Some of the things he’s subjected to  horrified me at times, but, as I said, I wouldn’t be surprised if this kind of thing happens to kids on a daily basis. Kids are cruel, and that cruelty is part of what drives Joey to embrace the unusual lifestyle that his father has chosen. Joey’s dad is a Digger, part of a long, rich history of grave robbers, and after Joey follows him to a job one night, he starts accompanying his father on digs, and is drawn into a world unlike which he’s never known.  To his surprise, Joey discovers an affinity for the trade, and there begins his adventure. I couldn’t turn the pages fast enough, and was fascinated right through to the shocking ending!
Kraus manages to take an unusual, taboo subject and turn it into a fascinating, horrifying,  and sometimes heartwrenching read. When Joey was being tormented at school, I felt it. When he labors over his first dig, fingers bleeding, body aching, drenched with sweat, I was there. I imagined I could smell the grave rot, and the stench that clung to Joey and his father after a job, and permeated their house. Kraus is that good. If you haven’t discovered this writer yet, what, exactly, are you waiting for?