Fantasy DNF Review: The Enterprise of Death by Jesse Bullington

DNF Review: The Enterprise of Death by Jesse Bullington 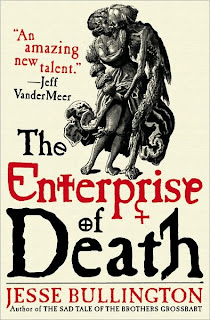 As the witch-pyres of the Spanish Inquisition blanket Renaissance Europe in a moral haze, a young African slave finds herself the unwilling apprentice of an ancient necromancer. Unfortunately, quitting his company proves even more hazardous than remaining his pupil when she is afflicted with a terrible curse. Yet salvation may lie in a mysterious tome her tutor has hidden somewhere on the war-torn continent.
She sets out on a seemingly impossible journey to find the book, never suspecting her fate is tied to three strangers: the artist Niklaus Manuel Deutsch, the alchemist Dr. Paracelsus, and a gun-slinging Dutch mercenary. As Manuel paints her macabre story on canvas, plank, and church wall, the young apprentice becomes increasingly aware that death might be the least of her concerns.
MY REVIEW
First let me say that I really enjoyed The Sad Tale of the Brothers Grossbart, Jesse Bullington’s debut novel. That said, I just couldn’t get into The Enterprise of Death. It didn’t grab me like Brothers Grossbart, and while I really like the author’s style of writing, the tale of an African slave, the necromancer that she is reluctantly apprenticed to, and the artist who’s internal conflicts haunt him, didn’t take hold like his first book did. This one took me a little too far out of my comfort zone, which is not necessarily a bad thing, and I may come back to this one at a later time. I picked it up and put it down far too often (which may be part of the issue), and in the end, gave up.  Now, this is NOT to say you shouldn’t give this book a try. You absolutely should! Jesse Bullington is a talented author and it’s a safe bet that I’ll pick up his next book! As you, dear reader, already know, so many things can influence how a certain book affects you at any given time: what’s going on in your life at the time, distractions (hopefully the lack of), and even just your mood! So, give this one a try and I hope you love it, because this author deserves your love (and make sure you pick up a copy of Brothers Grossbart)!
NOT RATED