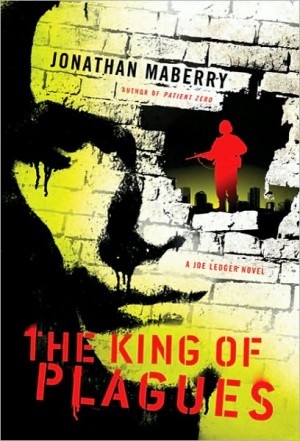 Saturday 09:11 Hours: A blast rocks a London hospital and thousands are dead or injured… 10:09 Hours: Joe Ledger arrives on scene to investigate. The horror is unlike anything he has ever seen. Compelled by grief and rage, Joe rejoins the DMS and within hours is attacked by a hit-team of assassins and sent on a suicide mission into a viral hot zone during an Ebola outbreak. Soon Joe Ledger and the Department of Military Sciences begin tearing down the veils of deception to uncover a vast and powerful secret society using weaponized versions of the Ten Plagues of Egypt to destabilize world economies and profit from the resulting chaos. Millions will die unless Joe Ledger meets the this powerful new enemy on their own terms as he fights terror with terror.

REVIEW
My favorite smart-mouthed, ex-cop hero is back for his third amazing adventure in Jonathan Maberry’s King of Plagues. I stayed up way too late last night and got up early this morning to finish it, and it’s still banging around in my head like ricochet. I will do my best to avoid the somewhat inevitable spoilers, but be forewarned…

The King of Plagues opens with our hero knocking around England, in mourning (see The Dragon Factory), and supposedly through with the DMS. Until he gets the call from Church, alerting him to a bombing at the Royal London Hospital. The devastation is complete, the body count is staggering, and Joe and the DMS is left to pick up the pieces of what will turn out to be one of their biggest threats yet: the work of The Seven Kings.What follows is a race against time to prevent death on a massive scale, and subvert the plans of a secret group that has its hand in nearly every part of government, and countless seats of power. No one is safe, and no one can be trusted.

Most of the usual suspects are back for The King of Plagues, with an exception (I’m trying to avoid spoilers here, guys!). Joe is back, of course, with his Echo Team, Church, Bug, the always charming Dr. Hu, and a villain from Patient Zero that you will loathe even more this time around. We also meet the lovely Dr. Circe O’Tree, and perhaps, most notably (at least for me), the scene stealing Ghost, a K-9 trained German Shepherd, and Joe’s trusted protector and friend. Ghost is my favorite new hero, next to Joe!

Maberry’s writing is in fine form, as usual, and some of the scenes will take your breath away. I say this because, in this age of terrorism and global strife, the “immediateness” of this book was jarring. The truth is, we really don’t know what goes on behind the scenes, in the shadow goverments, and in the minds of power hungry madmen pulling the strings of world events. Yes, The King of Plagues is fiction, but it’s fiction rooted in fact. The thought of some of the nastiest bioweapons in existence being tested on far-off islands is terrifying and it’s the kind of stuff that will keep any thinking and moral person up at night.

All of the elements that make these books great are here in spades: Egomaniacal madmen, a beautiful woman with delusions of Goddesshood, shadowy conspiracy, action (loads of action), a particularly sadistic assassin/enforcer, great fight scenes, just a touch of the otherworldly, and moments of nail biting suspense. Did I mention that I stayed up way too late last night?One thing that sets these books apart from the usual thriller/adventure fare is not only the superb writing, flawless pacing, and great dialogue, which is par for the course with a Maberry novel, but amidst the action, and the terror, and some of the most heinous scenarios this side of 9/11, is the ever present vein of Joe Ledger’s humanity and compassion that flows strong through everything he touches, and in how every situation touches him.If you haven’t discovered this series yet, what are you waiting for? If you have, and are eagerly awaiting The King of Plagues, you won’t be disappointed! I remain in awe of Jonathan Maberry and can’t wait to see what he has up his sleeve for next time. Next time can’t come soon enough!

Purchase The King of Plagues: Amazon