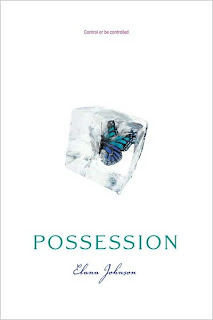 Vi knows the Rule: Girls don’t walk with boys, and they never even think about kissing them. But no one makes Vi want to break the Rules more than Zenn…and since the Thinkers have chosen him as Vi’s future match, how much trouble can one kiss cause? The Thinkers may have brainwashed the rest of the population, but Vi is determined to think for herself.
But the Thinkers are unusually persuasive, and they’re set on convincing Vi to become one of them….starting by brainwashed Zenn. Vi can’t leave Zenn in the Thinkers’ hands, but she’s wary of joining the rebellion, especially since that means teaming up with Jag. Jag is egotistical, charismatic, and dangerous: everything Zenn’s not. Vi can’t quite trust Jag and can’t quite resist him, but she also can’t give up on Zenn.
This is a game of control or be controlled. And Vi has no choice but to play.
MY REVIEW
Let’s face it, I’ve read A LOT of dystopian fiction lately. That said, Possession was an enjoyable read, if not a standout in the genre. Vi is a Goodie. She follows the rules, plugs in to nightly transmissions from the Thinkers, and doesn’t think for herself. Wait, that’s what Vi is supposed to do, but really, Vi has never been particularly good at following the rules, and when she’s caught walking with her beloved after dark, the powers-that-be decide they’ve had enough and arrest Vi, throwing her in jail with the enigmatic Jag, a free thinker from the Badlands. Through Jag, Vi discovers that not only does she have powers that she never knew she possessed,but that there is a whole other world out there, one where she can do what shewants, how she wants. Vi is torn though, because she has been promised to Zenn,but Zenn has been brainwashed and is now being controlled by the Thinkers. How can she reconcile her feelings for Zenn and her newfound feelings for the irrisistable Jag? When Vi and Jag break out of jail and find themselves on therun, Vi doesn’t know who to trust, and will find out secrets about her ownfamily that will threaten to blow her world apart!
I enjoyed Possession, and it was a fairly quick read, with likable characters and a fastpaced plot. Twists and turns abound, and I enjoyed the romance between Vi and Jag. It will certainly get teens and adults alike thinking about mind control,free will, and the effects of humanity on our environment!
Stalk the author: Website | Twitter
Possession: Amazon | Barnes & Noble