Kristin •February 13, 2011Uncategorized
Every Sunday I feature a title from an often overlooked genre: Suspense!These are books I’ve read and highly recommend to anyone that loves agood mystery or crime story, sometimes with a little humor thrown in! 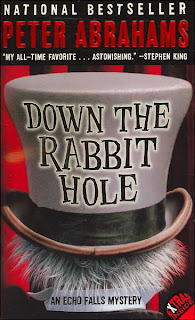 Today’s feature title is: Down the Rabbit Hole (Echo Falls Series 1) by Peter Abrahams
Publisher: HarperCollins (YA)
Welcome to Echo Falls. Home of a thousand secrets, where Ingrid Levin-Hill, super sleuth, never knows what will happen next.
Ingridis in the wrong place at the wrong time. Or at least her shoes are.Getting them back means getting involved in a murder investigationrivaling those solved by her idol, Sherlock Holmes, and Ingrid hasenough on her plate with club soccer, school, and the plum role ofAlice in the Echo Falls production of Alice in Wonderland. But much as in Alice’s adventures down the rabbit hole, things in Ingrid’s small town keep getting curiouser and curiouser.

The Echo Falls Series is one of my favorite mystery series! Peter Abrahams never talks down to his audience, even though his protagonist, the charming Ingrid, is only 13, and the mystery keeps you turning the pages! A pleasure to read!
Also be sure to check out Behind the Curtain, and Into the Dark!

About the Author
Peter Abrahams is the author of eighteen novels, including End of Story, Oblivion, and Lights Out, which was nominated for an Edgar best novel award. He also writes the best-selling Echo Falls series for younger readers. He lives on Cape Cod.