Kristin •February 6, 2011Uncategorized
Every Sunday I feature a title from an often overlooked genre: Suspense! These are books I’ve read and highly recommend to anyone that loves a good mystery or crime story, sometimes with a little humor thrown in!
Today’s Feature Title is: Tilt-A-Whirl by Chris Grabenstein 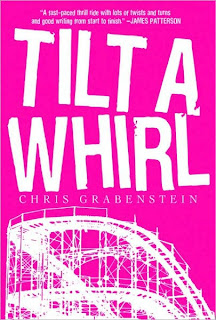 There isn’t much sun in the fun when a billionaire real estatetycoon is found murdered on the Tilt-A-Whirl at a seedy seasideamusement park in the otherwise quiet summer tourist town of Sea Haven.John Ceepak, a former MP just back from Iraq, has just joined the SeaHaven police department. The job offer came from an old army buddy whohoped to give Ceepak at least a summer’s worth of rest and relaxationto help him forget the horrors of war. Instead, Ceepak will head up themurder investigation. He is partnered with Danny Boyle, a 24-year-oldpart-time summer cop who doesn’t carry a gun and only works with thepolice by day so he has enough pocket money left over to play with hisbeach buddies at night.
In the first novel in a new serieswritten in the spirit of Carl Hiaasen’s work, the Tilt-A-Whirl murderpushes Ceepak’s deep sense of honor and integrity to the limits, asunexpected twists and turns keep the truth spinning wildly in everydirection.
Tilt-A-Whirl is a fun mystery with a two of the most likeable protagonists I’ve come across in a long time! I’m a huge fan of this series, and of Chris Grabenstein!
Visit Chris at his website!
About the author

Chris Grabenstein was the first writer hired as a result of JamesPatterson’s famous advertising aptitude test that ran in the New YorkTimes when Patterson was Creative Director of J. Walter Thompson. Nowhe is following in his mentor’s footsteps with his debut mystery novel.Chris spent several years at the nations top ad agencies. Before hestarted in advertising, Chris also worked with Bruce Willis (amongothers) in some of New York’s most acclaimed improvisational comedytroupes. A member of Mystery Writers of America, Chris lives in NewYork City