Horror The Reapers are the Angels by Alden Bell

The Reapers are the Angels by Alden Bell 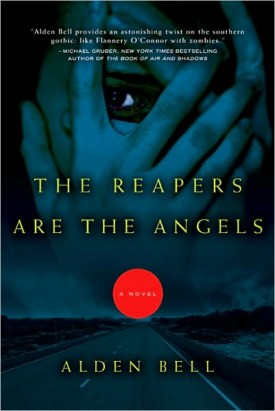 Zombies have infested a fallen America. A young girl named Temple is on the run. Haunted by her past and pursued by a killer, Temple is surrounded by death and danger, hoping to be set free.

For twenty-five years, civilization has survived in meager enclaves, guarded against a plague of the dead. Temple wanders this blighted landscape, keeping to herself and keeping her demons inside her heart. She can’t remember a time before the zombies, but she does remember an old man who took her in and the younger brother she cared for until the tragedy that set her on a personal journey toward redemption. Moving back and forth between the insulated remnants of society and the brutal frontier beyond, Temple must decide where ultimately to make a home and find the salvation she seeks.

REVIEW
It’s been 25 years since whatever horror that started the zombie apocalypse spread throughout the world. Fifteen year old Temple, driven from the lighthouse she calls home, begins a harrowing journey across a ruined America. Unflinching and brutal, Temple’s journey is fraught with danger, yet she eventually finds a purpose that will test her capacity for love and hope, and strengthen her will to live.

I could not put this book down. I fell in love with this tough, damaged, illiterate, street smart girl as she made her way across a wasteland filled with not only unspeakable horror (there are some genuinely scary, disturbing moments), but also oasis’ of beauty and humanity.

Alden Bell has created a zombie novel of the highest order. In addition, he’s created something rarely seen in this genre, a literary gem.