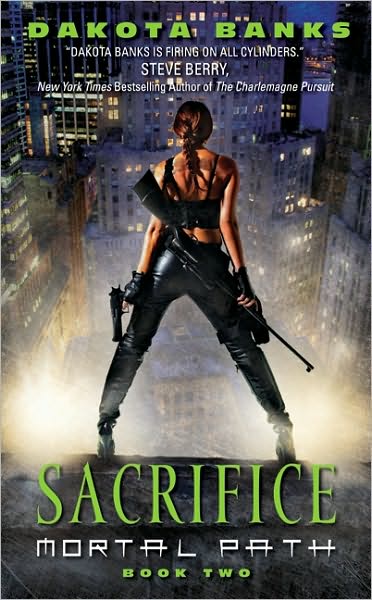 A demon’s enslaved executioner—a ravager of lives and souls—MalihaCrayne has been reborn, willing to sacrifice her immortality for achance at freedom . . . and salvation. Now she has an opportunity toprevent the death of thousands—perhaps tens of thousands—to make up forthe countless lives she has obliterated over the centuries. To do so,she must locate and destroy an evil cabal of madmen in possession of aweapon of unspeakable power—and survive the immortal assassins who arenow after her blood. But it means reverting to the old ways andsurrendering once more to the darkness. And if Maliha dies before themission is accomplished, the hell she once knew will seem like a picniccompared to the eternal torments awaiting her.

REVIEW
Sacrifice is the second book in the ass-kicking Mortal Path series by Dakota Banks. It helps to have read the first book, Dark Time, however, Ms. Banks provides enough back story sprinkled throughout Sacrifice that it can stand alone just fine. Maliha Crayne is a former assassion (The Black Ghost) in servitude to a demon in return for immortality, and she’s carried out countless killings at the whim of her master. When she broke her contract with the demon, she was forced to give up her immortality for the chance to redeem herself. She must balance the scales by saving lives before her mortal life is taken, or suffer eternal torment.

Fans of Tomb Raider and  Lara Croft will find much to love in this series! In Sacrifice, Maliha must face a centuries old madman bent on destruction. He’s one nasty villian and it will take all of the resources that Maliha has at her disposal to beat him! Luckily she has plenty. There’s something to be said about a character that’s has nearly unlimited resources amassed over centuries of living, like Maliha. I admit I have a weakness for cool gadgets, high tech weapons, and high end cars; Sacrifice has them in spades! You also get private jets, exotic locales, and a couple of sexy Ageless men (a Roman Centurion and a mysterious cop no less!), vying for Maliha’s attentions! The Mortal Path series is escapist fiction at its best, and I’ll look forward to the next installment!