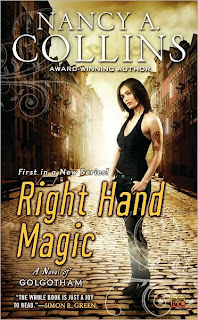 Right Hand Magic: A Novel of Golgotham by Nancy A. Collins
Publisher: ROC(December 2010)

Like most Manhattanites, aspiring artist Tate can’t resist a good rental deal-even if it’s in the city’s strangest neighborhood, Golgotham, where for centuries werewolves, centaurs, and countless other creatures have roamed the streets.

Her new landlord is a sorcerer named Hexe, who is determined to build his reputation without using dark, left-hand magic. As Tate is drawn into Hexe’s fascinating world, they both find that the right hand does not always know what the left hand is doing-and avoiding darkness is no easy trick…

REVIEW
I was iffy on this one to start, but as I read on, it kindof grew on me. Kind of. Tate is a trust fund baby, rebelling against the trappings of her wealthy parents by pursuing a career that her parents find beneath her.  She’s an artist, specializing in sculpture(of the metal kind), and the thought of her in a welder’s helmet, wielding a torch, is just too much for her blue blood parents to bear. After a bitter breakup with her boyfriend, she decides to move into Golgotham, New York’s home to witches, warlocks, satyrs, and all manner of magical creatures.  The rent is cheap, and her handsome landlord Hexe, a Kymeran, is nothing to sniff at either. When she’s attacked in the garden one night by a young were-cougar, and discovers the plot of an evil, Golgotham underworld boss, she knows her stay in Golgotham might be more than she bargained for!
Right Hand Magic was a light, fun read. It moves along nicely, and Tate , Hexe, and Lukas (the were-cougar), were fun characters to get to know. Collins’ description of Golgotham sometimes made me think of the goblin market scene in Hellboy 2, and I enjoyed the adventure and light romance.  I found the anti-prejudice message getting a little heavy-handed at times (Golgotham residents tend to be very wary of humans, and otherwise), and sometimes the dialogue was a bit trite, but all in all, it was a light, fun, diverting read, and a good break between “heavy”novels.