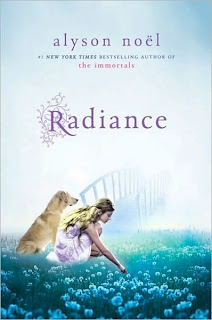 REVIEW
After an accident that kills 12 year old Riley Bloom, her parents, and her dog, Riley finds herself in the Here and Now, where, for the most part, everything is the same as in the world of the living.  Everything except the fact that she can do really cool things, like conjure up anything she wants to wear and walk through walls. She spends her time with her parents and her dog, Buttercup, and every now and then peeks in on her big sister Ever, in the land of the living.

The problems is that Riley isn’t adjusting to the Here and Now. Far from it. More than anything, she wants to return to the earth plane and be with her sister. When she goes for her first day of “school” in the Here and Now, she is faced with the Council. They will decide what her place in this world will be, and we she is handed her assignment of Soul Catcher, she’ll begin a journey that will change everything.

In an endless sea of dystopian/apocolyptic YA, Radiance was a sweet and refreshing change of pace. The story is told from Riley’s first person point of view, and in her, Ms. Noel was able to capture the capricious and intrinsically sweet nature of a 12 year old girl perfectly. Along with her golden retriever, Buttercup, and her guide Bodhi (who isn’t quite what he seems), Riley goes on an adventure of self discovery, and ultimately, hope.

I read Radiance in one sitting, and enjoyed it immensely! Keep an eye out for my early review of Shimmer, the next Riley Bloom novel! 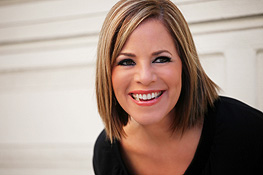 Alyson Noël is the #1New York Timesbestselling, award-winning, author of FAKING 19,ART GEEKS AND PROM QUEENS,LAGUNA COVE,FLY ME TO THE MOON,KISS & BLOG,SAVING ZOË,CRUEL SUMMER,FIRST KISS (THEN TELL)—an anthology, and the Immortals series including:EVERMORE,BLUE MOON, SHADOWLAND, DARK FLAME,NIGHT STAR(11.16.10), and a sixth and final book in 2011, as   well as the Immortals spin-off series beginning with RADIANCE on 08.31.10.

With over 2 million copies in print in the U.S. alone, her books have been published in 35 countries and have won such awards as the National Reader’s Choice Award, NYLA Book of Winter Award, NYPL Stuff for the Teenage, TeenReadsBest Books of 2007, Reviewer’s Choice 2007 Top Ten, chosen for the CBS Early Show’s”Give the Gift of Reading”segment, and selected for Seventeen Magazine’s”Hot List”and Beach Book Club Pick.

She lives in Laguna Beach, CA where she is working on her next book.
Visit the author at her website