Sci Fi Review: Outside In by Maria V. Snyder

Review: Outside In by Maria V. Snyder 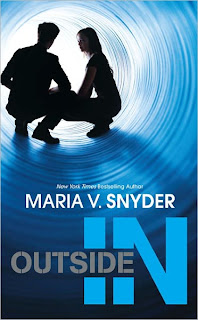 Outside In by Maria V. Snyder

Me?
A leader?
Okay, I did prove that there’s more to Inside than we knew.That a whole world exists beyond this cube we live in. And finding that led to a major rebellion—between worker scrubs like me and the snobby uppers who rule our world. Make that ruled. Because of me, we’re free. I thought that meant I was off the hook, and could go off on my own again—while still touching base with Riley, of course. He’s the one upper I think I can trust. But then we learned that there’s outside and then there is Outside.And something from Outside wants In.
REVIEW

**May include spoilers. If you haven’t read Inside Out, you may want to skip this review**Wow! I thoroughly enjoyed Inside Out and was hoping Outside In would be as good. Well, I wasn’t disappointed! After leading the rebellion of the scrubs, Trella is thrown into a world of political maneuvering, decision making, and delegation that she wants no part of. She just wants to be with her boyfriend Riley, and continue exploring the huge cube that she’s spent her entire life in, hoping to find areas to expand their living quarters. Soon, riots are breaking out, no one wants to perform the tasks that kept their world running, and Trella no longer knows who to trust. When a threat from the Outside comes calling, Trella is forced to re-evaluate everything she believes in and everyone she thought she could trust.

Outside In is fast paced and full of action, and the novel actually stands on it’s own. Ms. Snyder provides enough background that even someone that hasn’t read Inside Out would be able to follow Outside In without a problem, although I would definitely suggest reading Inside Out first. There are many exciting moments, moments of genuine terror, and in the Outsiders, the author has given us a creepy new threat that is a great addition to the story! The suspense is unrelenting and I managed to stay up way too late finishing this one because I just couldn’t put it down! This is a sci-fi, dystopian thriller you won’t want to miss!
Visit the author at her website!