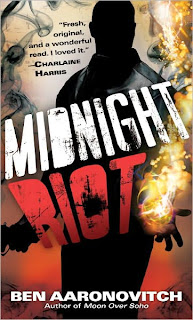 Probationary Constable Peter Grant dreams of being a detective in London’s Metropolitan Police. Too bad his superior plans to assign him to the Case Progression Unit, where the biggest threat he’ll face is a paper cut. But Peter’s prospects change in the aftermath of a puzzling murder, when he gains exclusive information from an eyewitness who happens to be a ghost. Peter’s ability to speak with the lingering dead brings him to the attention of Detective Chief Inspector Thomas Nightingale, who investigates crimes involving magic and other manifestations of the uncanny. Now, as a wave of brutal and bizarre murders engulfs the city, Peter is plunged into a world where gods and goddesses mingle with mortals and a long-dead evil is making a comeback on a rising tide of magic.

REVIEW
I went to the bookstore over the weekend with a promise to myself; buy one book, and make it a good one. This is a superhuman feat for me, but I did it! My choice was Midnight Riot by Ben Aaronovitch, and boy was it a good one! I admit, I’m a sucker for British writers, and when I saw that not only was Ben Aaronovitch a Brit, but that Midnight Riot took place in London, I was sold!

Peter Grant is a probationary constable for the Metropolitan Police force, days away from coming out of the mandatory two year probation period required of all officers, when he finds himself talking to a ghost (who insists he’s a witness) at the scene of a gruesome beheading. Soon he finds himself apprenticed to Nightingale, a wizard at the Met, and keeping company with old magic, River Gods and Goddesses, ghosts, and vampires.

Peter Grant has the wry wit that I love in my English coppers, and I had great fun riding along as he works to solve the mystery of a ghost wreaking havoc in and around London. Rich in magic, history, and all manner of things that go “bump”, Midnight Riot is everything I love in this genre. It’s part police procedural, part urban fantasy, and all kinds of cool! Keep your eye out for Moon Over Soho, the next Peter Grant adventure!