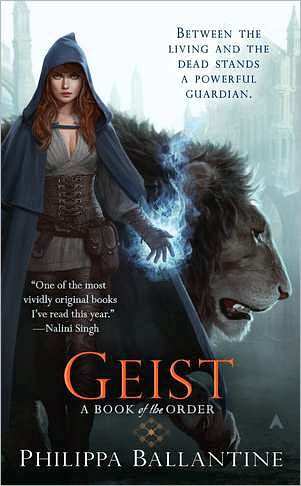 Between the living and the dead is the Order of the Deacons, protectorsof the Empire, guardians against possession, sentinels enlisted to wardoff the malevolent haunting of the geists…

Among the mostpowerful of the Order is Sorcha, now thrust into partnership with thenovice Deacon, Merrick Chambers. They have been dispatched to theisolated village of Ulrich to aide the Priory with a surge of violentgeist activity. With them is Raed Rossin, Pretender to the throne thatSorcha is sworn to protect, and bearer of a terrible curse.

But what greets them in the strange settlement is something far morepredatory and more horrifying than any mere haunting. And as sheuncovers a tradition of twisted rituals passed down through the darkreaches of history, Sorcha will be forced to reconsider everything shethinks she knows.

And if she makes it out of Ulrich alive, what in Hell is she returning to?

After Deacon Sorcha Faris’ husband and partner, Kolya, is gravely injured after a devastating geist battle, she is paired with young Deacon Merrick Chambers. They are sent by the Arch Abbott to the village of Ulrich, where a geist infestation is devastating the villagers. Along for the journey is pretender to the throne, Raed Rossin, who carries a dark secret that has the power to kill, or possibly save, them all.

Geist was more pure fantasy than I’m used to, however, Philippa Ballantine has made it extremely accessible to this reader, and I suspect the same for fans of urban fantasy. There’s a bit of everything in Geist: ghosts (lots of ghosts), sword fights, plenty of magic slinging, pirates, possessed sea creatures, and delicious romance! Great world building and intriguing characters round out a rich, entertaining read! I’ll be eagerly awaiting Spectyr, the next installment in the series!