Fantasy Interview and Giveaway with Mike Shevdon (Courts of the Feyre)

Interview and Giveaway with Mike Shevdon (Courts of the Feyre)

I recently asked the wonderful Mike Shevdon, UK author of the Courts of the Feyre series, to join me for a few questions, and he agreed! He has also generously offered *SIGNED* copies of Sixty-One Nails and The Road to Bedlam to one lucky winner!

Please welcome Mike to the blog!

My Bookish Ways: Mike, thanks so much for stopping by my blog! Would you mind telling us a bit about yourself? 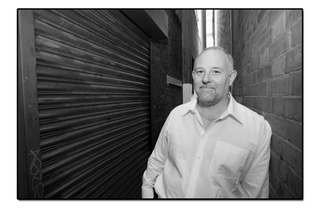 Mike Shevdon: Hi Kristin. Thanks for inviting me on. For those who don’t know me, I am a male urban fantasy author, a rare beast in itself, who enjoys writing about fantasy in the real world with all the confusion, chaos, complication and complexity that entails. I’m also a father, a cook, a martial artist and a technologist – not necessarily in that order.

MBW:Did you always want to be a writer? Did writing choose you, or did you choose it?
MS:Hmm, that’s a difficult one. I guess since I didn’t set out to be a writer, it chose me. What got me started was critiquing for a mainstream fantasy author, helping her develop material. It taught me to look at writing critically. That set me on the road to writing for myself and the rest, as they say, is history. Observers should note that this particular strain of writing appears to be contagious – symptoms include scribbling hurried notes down in the middle of conversations, disappearing into a corner with a laptop and making excessive use of a dictionary.
MBW:Is there anything you absolutely need to have in order to write? Anything that especially gets the creative juices flowing?
MS:No, I don’t need a special keyboard or a lucky token. I can write almost anywhere you can get a laptop, and some places you can’t. If I get stuck, which does happen from time to time, I have a bath. There’s something about not being able to write things down – to have to keep it all in your head at once – that helps me resolve problems by extending the horizon and seeing the big picture. It’s worked so often that it’s now referred to as ‘steaming the brain’ by the family.
MBW:Your novels are rich in English history and folklore. Do you research everything yourself, or do you have help?
I do a lot of my own research, but my wife Sue is a professional researcher in areas of historic interest (she’s an expert witness) and sometimes comes up with bizarre and interesting titbits. Then there are friends and relatives who come up with discoveries they have made. More recently, my readers have started sending me thing they think might be interesting for me. It’s great when that happens. 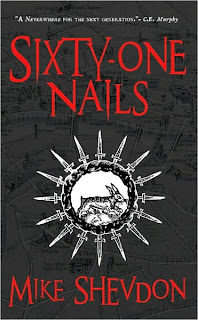 MBW:For those that haven’t yet read Sixty-One Nails, can you tell us a bit about it?
MS:You can read the synopsis and reviews in various places, not least on this blog, so I won’t repeat that. The story is about discovering that magic exists in the real world, that funny little folk-tales and faerie stories have a basis in truth, though the stories are a distortion of reality and the truth is darker and more complex than most people suspect. It’s about a man called Niall who is a divorced workaholic, who has his world turned upside down by an old lady who’s much older than she appears. Embedded within it are secrets hidden in plain sight and the consequences of decisions made centuries ago, the true impact of which are only now beginning to become apparent.
MBW:I read that you’re a Stephanie Plum fan! I’m a huge fan myself, so I was both surprised and thrilled to read that! There are probably quite a few male Plum fans out there that won’t admit it! What other authors or books do you enjoy?
MS:So many great books, so little time. You already know about Janet Evanovich’s Stephanie Plum books which appeal just as much to men as women, though her other writing is more romantically inclined. I’m also a big fan of Terry Pratchett, whose stories are always deeper than they initially appear. Other fantasy reads are Joe Abercrombie who has a delightfully twisted imagination and for Urban Fantasy I turn to Mike Carey and C E Murphy, though they are very different styles, and I’m currently trying to get hold of Ben Aaronovich’s Rivers of London, which I read the first chapter of in a sampler and would love to continue.
MBW:I read in your bio that you’re a great cook, and invented something called Squeaky Cheese Curry. I love a good curry! Could you tell us a little more about that? What else do you enjoy cooking?
MS:A great cook? Hmm, not sure about ‘great’, but I do love to cook. Squeaky Cheese Curry’s proper name is Halloumi Massaman which is a rich curry with a coconut milk base in a thai style with peanuts and baby new potatoes. It’s wonderfully aromatic, especially if you add a lime leaf and a couple of star anise. Mostly I cook asian food, but I also love to cook fish. My salmon parcels with fennel seed, oregano, chilli and butter are quite popular and I have requests for beef slow cooked in Guinness. My suet dumplings need work, though.
MBW:When you’re not cooking and writing great fiction, what do you like to do to unwind?
MS:I am a keen target archer, though again I make up with enthusiasm what I lack in expertise. Mostly I hit the target. I find archery helps to de-stress you as you have to concentrate on what you are doing or the arrow will not find the target. I currently have three bows, a Bowtech compound, a Hoyt recurve and a Grozer Hungarian horse-bow.
MBW:Is there something you can tell us about yourself that not a lot of people know about?
MS:When I was young in the summer holidays, my friend Marcus and I were bored so we took all the bricks that my Dad had delivered to build a garage on the side of the house and filled the tops in with mud pies. By the time he came home that evening they were all set solid. I’ll leave you to figure out his reaction.
MBW: A little bird (that looks astonishingly like the FAQ on your website) told me there will most likely be a third novel in the Courts of Feyre series. Can you give us a teaser? 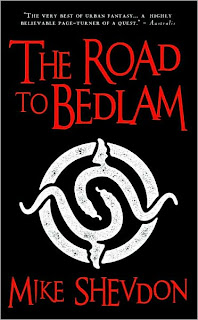 MS:I don’t usually do spoilers and if you haven’t read The Road to Bedlam you should probably skip this next bit. Let me pose a series of questions. If you’d been kidnapped and tortured (from your perspective) would you want compensation, revenge, retribution? If you could act without fear of detection or punishment – indeed you felt that you’d already been punished – what would you do to a society that had abused you? Shall I just say that I think Niall will have his hands full with the people that escaped. Alex is also having trouble adjusting, and is no longer the little girl that Niall thought he’d lost, and Blackbird? Well she has more than just the baby to look after.

MBW:Do you have any plans in the works for future projects other than the Courts of Feyre series?
MS:I do, but they are seekrit. There are two projects off in the background, one which looks like a stand-alone novel and another which looks like a series. When and whether they come to pass is part of a future not yet known.
Visit Mike at his website!
Read my review of Sixty-One Nails