Every Sunday I feature a title from my library in the suspense genre! 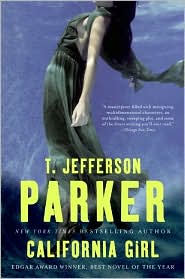 The Orange County, California, that the Becker brothers knew as boys is no more—unrecognizably altered since the afternoon in 1954 when Nick, Clay, David, and Andy rumbled with the lowlife Vonns, while five-year-old Janelle Vonn watched from the sidelines. The new decade has ushered in the era of Johnson, hippies, John Birchers, and LSD. Clay becomes a casualty of a far-off jungle war. Nick becomes a cop, Andy a reporter, David a minister. And a terrible crime touches them all in ways they could never have anticipated when the mutilated corpse of teenage beauty queen Janelle Vonn is discovered in an abandoned warehouse.

This is a beautifully written novel of childhood secrets and family betrayal. It will keep you turning pages into the wee hours…

Read my review of The Border Lords by T. Jefferson Parker