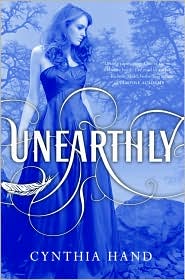 Clara Gardner has recently learned that she’s part angel. Having angel blood run through her veins not only makes her smarter, stronger, and faster than humans (a word, she realizes, that no longer applies to her), but it means she has a purpose, something she was put on this earth to do. Figuring out what that is, though, isn’t easy.

Her visions of a raging forest fire and an alluring stranger lead her to a new school in a new town. When she meets Christian, who turns out to be the boy of her dreams (literally), everything seems to fall into place—and out of place at the same time. Because there’s another guy, Tucker, who appeals to Clara’s less angelic side.

As Clara tries to find her way in a world she no longer understands, she encounters unseen dangers and choices she never thought she’d have to make—between honesty and deceit, love and duty, good and evil. When the fire from her vision finally ignites, will Clara be ready to face her destiny?

It took me a bit to get into this novel, but only because, at 34, I have to sort of flip a switch on my brain and slip back into my 16 year old self when I read YA. Every year that gets harder and harder to do, but I digress. That said, once I got into it, I just loved it! This is my first foray into the “angel” fever that has seemed to grip YA recently, and if this is any indication of what’s out there, I’ll be scrambling to get my hands on anything I can!

The book begins with our 16 year old heroine, Clara Gardner,  having a vision of a fire blackened forest, and a boy she’s never met reaching out to her. It effectively sets the tone of the story and gets the attention of the reader right from the start. You see, Clara is an angel-blood, or more specifically, a Quartarius, meaning her mother is half-angel, making her a quarter angel.  Clara’s got wings, and when her emotions are high, she glows, and that is not the limit to her powers. After this troubling vision causes her to actually faint, her mother declares that they must pack up and move from their California home to the Rocky Mountains, so Clara can fulfill her “purpose.” Exactly what that purpose is, Clara isn’t exactly sure, but the quest to fulfill it will test her limits, not only as an angel-blood, but as a human.

First and foremost, this is a coming of age story as Clara comes into her powers and has to choose between fulfilling her destiny and true love. Ms. Hand was very adept at letting the story unfold and not revealing anything too fast.  She did the same with the characters, keeping Clara’s mom, especially, somewhat of a mystery until the very end of the story, when  we catch a glimpse of who (and what), she might be, saving it for the next story. There were actually some fun twists and some genuinely creepy moments to round it out, especially when we meet one of the Black Wings (very cool…you’ll see). I’m very anxious to see what else Ms. Hand has to offer, and she’s promised a sequel, so keep your eye out! She’s most definitely an author to watch!
Grab your copy HERE