Uncategorized REVIEW The Sweet Scent of Blood by Suzanne McLeod

REVIEW The Sweet Scent of Blood by Suzanne McLeod 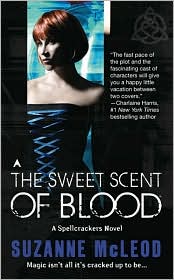 The Sweet Scent of Blood by Suzanne McLeod
Publisher: Ace


Genevieve Taylor is a Sidhe – one of the noble fae – and she’s unusual, even in present-day London where celebrity vampires, eccentric goblins and scheming lesser fae mix freely with the human population. Genny is a rising star at Spellcrackers.com, where she finds the M’ in magic – and that invariably leads to mischief, malice and – too often – murder. When Mr October, one of the hot calendar pin-up vamps, is accused of violently murdering his girlfriend, Genny’s called on to repay an old debt and prove his innocence. And she’s about to learn that some magic isn’t all its cracked up to be.

Review
Wow! What a complex, fun, just plain wonderful book! Suzanne McLeod has created an alternate London where vampires are celebrities, spotting fae is an everyday occurrence, and magic is reality. Genny Taylor is a Spellcracker for a witch-run company called Spellcrackers.com.  She is asked to investigate the murder of a beautiful girl, supposedly by a popular vampire, an investigation that will turn Genevieve’s world upside down!

The first half of the book is spent introducing a rather large cast of characters, and laying the foundation of the alternate London that Ms. McLeod has created. It’s a richly layered novel, and I had a bit of trouble keeping everything straight at first, but during the second half, it all resolved into a cohesive whole. The action rarely let up, and Ms. McLeod ratcheted up the tension until the very end. Genny is a strong character, although flawed, and she has a secret that threatens to undo everything she holds dear. The sexual tension between her and her soon-to-be boss Finn (a satyr, no less), is palpable, and I’m sure will be explored in future books (well, I hope it will!). The Sweet Scent of Blood was, all in all, a fun and exciting read, and I’ll look forward to the next in the series! 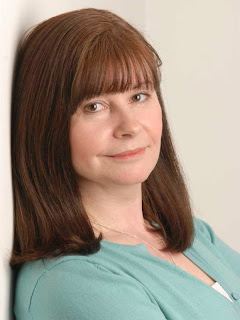 About the author
From her website: Growing up I was always the child that hid behind the settee, or took a torch to bed, or walked around ignoring the rest of the world, because I was reading a book. The highlight of my week was the trip to the library. Now, the highlight of my year is when I get to take a suitcase of brand new books and escape with it to somewhere hot, with plenty of sea and sand and Margaritas.

In order to afford the books and the holidays, (as well as those other pesky essentials, like food, the mortgage, and bills!) I’ve been a cocktail waitress, a dance group roadie, and a secretary. I’ve worked in pubs, hotels and a football club (despite having no love for the beautiful game) and I’ve sold everything from sweeties to jewellery, and garden sheds to car insurance.
Other than reading, my hobbies usually involve knocking down walls, the odd bit of plumbing, and hacking down the weeds that are going for world domination in the garden. My favourite meal is anything fishy, preferably sushi or shellfish, and when not indulging in the holiday Margaritas, I like the odd glass of red wine, or a single malt. Oh, and chocolate, of course!

I was born in London, but spent most of my childhood in the Midlands. Since then I’ve been a bit of a nomad, having lived and/or worked in most parts of the UK. Now I’m settled on the South Coast about a mile away from the sea, along with my husband and our rescue dog, a geriatric German Shepherd/Lab, who doubles as a tummy on legs.
Visit Suzanne at her website