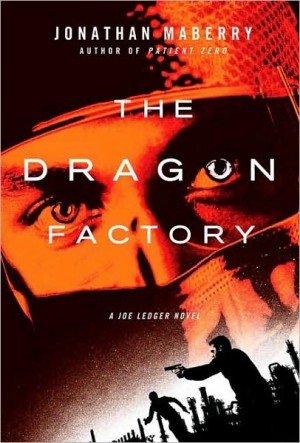 Joe Ledger and the DMS (Department of Military Sciences) go up against two competing groups of geneticists. One side is creating exotic transgenic monsters and genetically enhanced mercenary armies; the other is using 21st century technology to continue the Nazi Master Race program begun by Josef Mengele. Both sides want to see the DMS destroyed, and they’ve drawn first blood. Neither side is prepared for Joe Ledger as he leads Echo Team to war under a black flag.

REVIEW
The second novel in Maberry’s Joe Ledger series starts very soon after Patient Zero left off, with Joe visiting the gravesite of one of his oldest and dearest friends. The problem is, he’s a wanted man, and the man that wants him is none other than the Vice President of the United States. He’s sent this goon squad to pick up Joe, but Joe has other plans…

Taking off like lightning and never letting up, The Dragon Factory is a cross-genre, gritty, fun, roller coaster of a ride! I loved Patient Zero, and The Dragon Factory doesn’t disappoint, in fact, I think I loved it more! Told in first person POV of Joe Ledger, my favorite tough, snarky ex-cop, (with frequent forays into third person with one of the book’s star psychos, Cyrus Jacoby) it grabs you by the throat, and doesn’t let you go until the last page! What’s not to love? Joe and Echo Team have to deal with everything from psychotic Nazi clones, to an organization called the Cabal, which is out to achieve ethnic cleansing on a worldwide scale. Add to that DNA manipulated beasts, a race of slaves called the New Men, bio-terror on an epic scale, a pair of the creepiest, ickiest (yes, icky), twisted (had to throw that in there), albino (yes, albino) twins, and a boy hero that will break your heart and reaffirm your belief in the power of the human spirit.

Maberry throws all of this at you with his usual perfect pacing and style, and the depth of detail and research put into this book is, as always, impeccable. One thing that Maberry does in his novels is something that you don’t see a lot of in books that are this action oriented. In the midst of all this chaos and adrenaline, in Joe Ledger he’s created a character hat not only kicks ass, but he has a heart and soul, and it comes across in nearly every scene that he’s in. In Joe, he gives us a hero to root for, if for no other reason than he is intrinsically good. Joe is not superhuman, and he doesn’t have supernatural abilities. He’s an everyman with, admittedly, rather unique talents that we can all identify with in some way. In The Dragon Factory, Maberry takes topics that are complex and sometimes terrifying, and delivers them with humanity and sometimes humor. There were moments during this book (in particular one) that brought me to tears, as with Patient Zero, and Maberry shows us that humanity does not have to be sacrificed for the sake of an exciting read!

This series is absolutely not to be missed, and I recommend it to anyone that loves thrillers, horror, suspense, espionage, fantasy, andall of the above! I am breathlessly anticipating the third book in the JoeLedger Series, The King of Plagues, due out March 29th!