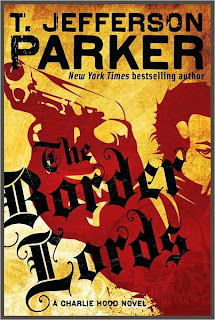 ATF agent Sean Ozburn is deep undercover supporting the sicarios of the Baja Cartel when he suddenly goes completely dark, his only communications being the haunting digital videos he sends to his desperately worried wife, Seliah. Charlie Hood must determine if Oz is simply chasing demons deeper undercover than anyone has ever gone, or whether his friend has suffered a permanent break with his mission and his moral compass.

REVIEW
I’d like to start off by saying that I have been a fan of T. Jefferson Parker since I was about 15 and got my hands on my parent’s copy of Laguna Heat, so about 20 years now. Since then, he’s been on my autobuy, and he’s gotten better and better with each subsequent release.  He is a three-time Edgar Award winning author, and is frankly a master of his genre. You can imagine how thrilled I was when Dutton kindly sent me a copy of The Border Lords for review!

Gushing aside, The Border Lords is a wonderful, heartbreaking installment in the Charlie Hood series. The book opens with Charlie Hood observing three North Baja Cartel assassins on hidden cameras installed in a “safe house” set up by the ATF.  In front of his team’s eyes, the camera feed is lost and upon arriving at the safe house, the bodies of the three assassins are found dead. Suspicion is immediately cast on Sean Ozburn, and agent that has been deep undercover with the ATF for nearly 18 months. The only problem is, they haven’t heard from Oz in 6 days. His only contact is disturbing videos and increasingly strange emails sent to his wife.

What follows is the hunt for a man that is spiraling into disillusionment and madness, driven by his frustration with what he feels is a hopeless cause. He is sick in body and mind, a good man who’s faith has been tested time and time again. Yes, The Border Lords is a crime novel, with fascinating insight into the lives of agents that go deep undercover to bring down the murdering cartels running drugs,guns, and money across the border. First and foremost, however, it’s a novel about the intense love between a man and his wife, and the bonds of friendship.

Parker is a master of subtlety, and what makes his writing great is in his beautiful dialogue, his use of setting and place (the stark beauty of the Southern California desert) to create a feeling,  and the treatment of his characters, unflinching, raw, and sometimes heartbreaking. I read this book in a day and I highly recommend it to anyone that loves beautiful writing and a good mystery.Note: The Border Lords is the fourth in the Charlie Hood series, however, it can stand alone. Don’t get me wrong, reading them in order is a plus, but it’s not necessary. *If you’re as fascinated by the lives of undercover law enforcement as I am, I also recommend reading No Angel: My Harrowing Undercover Journey to the Inner Circle of the Hells Angelsby Jay Dobyns.