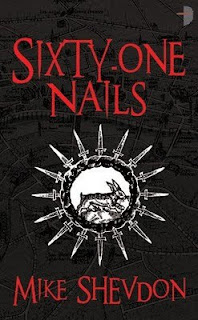 
HERE IS A SECRET WAR GROWING BENEATH THE STREETS OF LONDON.

A dark magic will be unleashed by the Untainted…Unless a new hero can be found. The smarter, faster brother to Neil Gaiman’s Neverwhere has arrived.
The immense Sixty-One Nails follows Niall Petersen, victim of a suspected heart attack on the London Underground, into the hidden world of the Feyre, an uncanny place of legend that lurks just beyond the surface of everyday life. The Untainted, the darkest of the Seven Courts, have made their play for power, and unless Niall can recreate the ritual of the Sixty-One Nails, their dark dominion will enslave all of the Feyre, and all of humankind too.

My Review
The book opens with Niall Petersen having a suspected heart attack by the London Underground, and being saved by a mysterious, and beautiful, stranger that calls herself Blackbird. Thus begins Niall’s journey into the mystery of Feyre. This book was strange, and by strange I mean that it kept me eagerly turning the pages, even though…if you’re looking for non-stop action, this is not your book.  There is some action, make no mistake, but most of the novel revolves around the developing relationship between Niall (Rabbit) and Blackbird, and Niall’s discovery of a vast other world that he never even knew existed.  There are some genuinely creepy moments, when the Untainted comes into the picture, and the magic is palpable. This was so wonderfully written, lyrical even, and the pacing was just about perfect. Not to mention learning all about the Quit Rents ceremony was great fun! It was a charming, magical book, and I am a confirmed Mike Shevdon fan. I’ll follow Rabbit and Blackbird anywhere!
Purchase Sixty-One Nails: Amazon