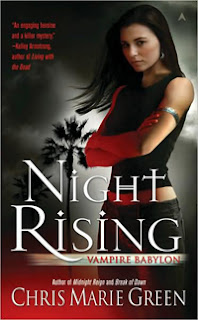 Dawn Madison is a stuntwoman laying low after a humiliating “incident”on the job. When she is contacted with the news that her father, Frank, has gonemissing while investigating the sighting of a child actor that was supposed tobe dead, she is drawn into a supernatural world she never knew existed.
Night Rising is just a fun, sexy ride of a novel. Dawn istough and resilient, yes, but she’s also broken, and feels like she isconstantly in the shadow of her sex symbol mother, who died when she was young.She teams up with Breisi, a beautiful techno geek(with a penchant for rather tackyteddy bear t-shirts) and Kiko, a short, sweet, and psychic actor, to find herfather and solve the mystery of the supposedlydead child star.
Then there’s The Voice, Breisi and Kiko’s Charlie’sAngelesque boss, supposedly a talented hypnotist and a shut-in. Dawn never seeshim, but she most certainly feelshim, which serves as a nearly constant distraction for Dawn. How Ms. Greenmanaged to make a disembodied voice sexy, I don’t know, but she did!
I liked Dawn. A lot. She grew on me more and more as thenovel progressed. She uses sex as a balm, and as a way to escape from herself.She’s terrified of getting close to others and suffers from a near constantjealousy of the legendary beauty that her mother was in life. These weaknesseswere what I liked most about her, because we all have insecurities, some morethan others, and this vulnerability made me identify with her all the more.
Night Rising alternates between looking over Dawn’s shoulder inthird person POV and taking us Underground, where a race of vampires hold thekey to this mystery, and an aging Master and his second in command are trying tohold together the secret of their existence. Ms. Green did a great job atconveying the sensuality of the vamp race without resulting to gratuitousscenes, and I really enjoyed her rather fun and unique hierarchy within thevamp Underground, not to mention the different kinds of vamps that make up the vampire race, some of which aresuper nasty; the barbed tails and sharp silver teeth kind of nasty! The author’swriting style is smooth, and easy to keep up with, and she doesn’t clutterthings up with info overload, rather weaving in details throughout the novel,keeping you reading and wanting to learn more about her quirky (and lovable)cast of characters.
A more perfect, and rich, backdrop could not have been foundfor this book, and Ms. Green mines it for all it’s worth!  Hollywood glamour and the trappings of celebrityhighlight the dark secrets that lurk just beneath the surface. Just when I’d had enough of vampires and didn’tthink there was anything original left, I discovered Night Rising, and I’m soglad I did!  I’m actually happy that Ididn’t read this when it first came out, in 2007, because now there arefive more books in the series, and Idon’t have to wait to read them! I’m looking forward to learning more aboutDawn’s past, not to mention getting more of Kiko, Breisi, and of course, TheVoice! 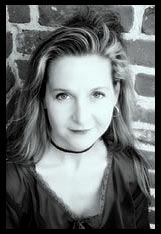 Chris Marie Green, former school teacher turned full-time writer, gets out of the office by taking long trips to places such as Japan, Italy, and New Orleans. When she’s not causing international incidents, she enjoys yoga, reading just about everything, plus movie-going. She also writes under the name Crystal Green.