Urban Fantasy REVIEW: Master of None by Sonya Bateman

REVIEW: Master of None by Sonya Bateman 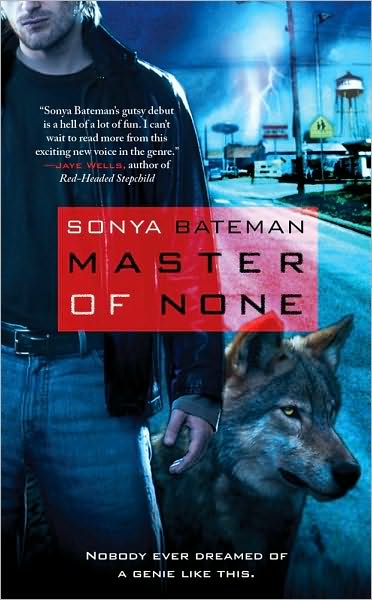 Synopsis:
ONE UNLUCKY THIEF. ONE UNLIKELY GENIE. ONE VERY ODD COUPLE.Gavyn Donatti is the world’s unluckiest thief. Just ask all the partners he’s lost over the years. And when he misplaces an irreplaceable item he was hired to steal for his ruthless employer, Trevor—well, his latest bungle just might be his last. But then his luck finally turns: right when Trevor’s thugs have him cornered, a djinn, otherwise known as a genie, appears to save him.Unfortunately, this genie—who goes by the very non-magical name of “Ian”—is more Hellboy than dream girl. An overgrown and extremely surly man who seems to hate Donatti on the spot, he may call Donatti master, but he isn’t interested in granting three wishes. He informs Donatti that he is bound to help the thief fulfill his life’s purpose, and then he will be free. The problem is that neither Donatti nor Ian has any idea what exactly that purpose is.At first Donatti’s too concerned with his own survival to look a gift genie in the mouth, but when his ex-girlfriend Jazz and her young son get drawn into the crossfire, the stakes skyrocket. And when Ian reveals that he has an agenda of his own—with both Donatti and the murderous Trevor at the center of it—Donatti will have to become the man he never knew he could be, or the entire world could pay the price. . . .

REVIEW
Gavyn Donatti is a thief with a problem. He’s lost something, and a thug named Trevor wants it back. Now Donatti’s on the run from the kind of guys that carry trash bags “just in case” they need to dispose of abody on the fly. When Trevor’s thugs finally catch up with him, he also discovers that they’re not the only ones that want him. Now he’s got a bad tempereddjinn (genie) named Ian stuck to him like glue, and when his ex girlfriendshows up armed with a huge secret (and a gun), he finds himself on a collision course with fate that could change the future of humanity.

Gavyn Donatti is everything I like in a reluctant hero. In spite of his career choice, he has a morality that comes across in everything he does, self deprecating charm, and sarcastic wit. The world that Sonya Bateman has created is much like our own, but with magic lurking around everycorner. Even Gavin begins to realize that some of the “talents” that he’s hadall his life may be more than ordinary.
In Master of None, Ms. Bateman has created a fascinating,unique mythology for the djinn, and one of my new favorite supes in Ian, theattitude-challenged djinn that holds the key to Gavyn’s past, and future. It’sgot a bit of everything; a villain that considers torture an art form, atenacious bounty hunter, car chases, gun play, shape shifting djinn, humor, supernaturalclan wars, a very memorable “shopping trip” through Wal-Mart, and a dash of romance! This is one adventure you don’twant to miss!