Uncategorized REVIEW: Inside Out by Maria V. Snyder

REVIEW: Inside Out by Maria V. Snyder

Inside Out by Maria V. Snyder
Publisher: Harlequin Teen (April 2010)
YA 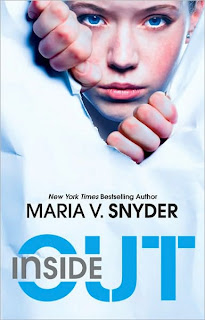 Keep Your Head Down.
Don’t Get Noticed.
Or Else.

I’m Trella. I’m a scrub. A nobody. One of thousands who work the lower levels, keeping Inside clean for the Uppers. I’ve got one friend, do my job and try to avoid the Pop Cops. So what if I occasionally use the pipes to sneak around the Upper levels? The only neck at risk is my own…until I accidentally start a rebellion and become the go-to girl to lead a revolution.

REVIEW
I’m already a fan of Maria V. Snyder’s Poison Study series, so I was pretty confident I would enjoy this, and boy was I right! I also love dystopian fiction, so this was right up my alley! The insular world that Snyder creates in this novel is fascinating, and while I’ve never thought of myself as claustrophobic before, following Trella through narrow air ducts and crawl spaces gets a little sticky at times!

Trella begins the novel as a cynical 17 year old who keeps her head down, does her job, and also does her best to get close to as few people as possible, with the exception of Cog, who was her Care Mate while they were growing up in the Care Facility, and has remained her closest and dearest friend. In the lower levels, everything and everyone is monitored, and trouble makers are swiftly dealt with by the Population Police, aka the Pop Cops. Every scrap of clothing, food, and building material is recycled and reused and if the Pop Cops don’t stop dissenters, the threat of the Chomper most certainly will. You see, it’s not only food and clothing that’s recycled, but humans, as well.

When Trella is introduced to a “prophet” from the Upper levels named The Broken Man, the promise that a Gateway to Outside exists plants a kernel of hope in Trella’s hardened heart, and she unwittingly becomes the catalyst for a revolution, putting herself, and those she loves the most, in the gravest of danger. Is hope enough to make the ultimate sacrifice?

This was a nailbiting read! Full of heart pounding adventure and compulsively readable, Inside Out will have you turning pages long into the night! You won’t want to put it down!
Visit Maria V. Snyder at her website