Fantasy Hunted by the Others by Jess Haines

Hunted by the Others by Jess Haines

Hunted by the Others (H&W Investigations #1) by Jess Haines
Publisher: Kensington/May 2010
Urban Fantasy 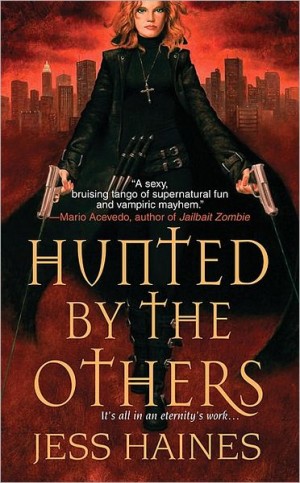 They are the Others-the vampires, mages, and werewolves once thought to exist only in our imaginations. Now they’re stepping out of the shadows, and nothing in our world will ever be the same again…

In A Town Like This, Being A P.I. Can Be Murder

Shiarra Waynest’s detective work was dangerous enough when her client base was strictly mortal. But ailing finances have forced her to accept a lucrative case that could save her firm-if it doesn’t kill her first. Shiarra has signed on to work for a high-level mage to recover an ancient artifact owned by one of New York’s most powerful vampires.

As soon as Shiarra meets sexy, mesmerizing vamp Alec Royce, she knows her assignment is even more complicated than she thought. With a clandestine anti-Other group trying to recruit her, and magi being eliminated, Shiarra needs back-up and enlists her ex-boyfriend-a werewolf whose non-furry form is disarmingly appealing-and a nerdy mage with surprising talents. But it may not be enough. In a city where the undead roam, magic rules, and even the Others aren’t always what they seem, Shiarra has just become the secret weapon in a battle between good and evil-whether she likes it or not…

This book was just plain fun! Shiarra Waynest is a human P.I. in a world of Others (vamps, weres, mages, you name it), who is asked by a very powerful mage to locate an ancient artifact. The problem is, this artifact might be in the hands of one of the most powerful vampires in the world. I really liked that Shia was human, and is understandably terrified at being in a situation that she feels is way beyond her expertise. It was a breezy read, and I was glad that most things wrapped up in the end, at the same time leaving plenty of material for the next book, especially regarding a certain very sexy vamp (and an equally sexy were)! I’m most definitely looking forward to Taken by the Others!

Purchase Hunted by the Others: Amazon