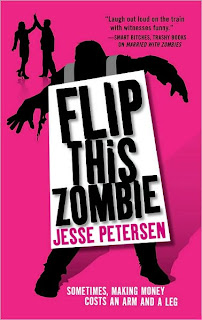 Synopsis (from BN.com)
The Zombie Apocalypse has been good to Sarah and David. Their marriage is better than ever. They communicate well, share responsibilities, and now, they’re starting a business. ZombieBusters-for all your zombie extermination needs.There are lots of zombies and that means lots of customers…Except one of them doesn’t want the zombies dead, he wants them alive and ready for experimentation. Mad scientists make for difficult clients and this time, Sarah and David might have bitten off more than they can chew.

I absolutely loved Married With Zombies, Jesse Petersen’s first novel, about a dysfunctional couple seeking marriage counseling at the onset of Zombie Apocolypse. It was a quick, super-fun read, so I had high hopes for Flip This Zombie! Well, it didn’t disappoint! If anything, it was more fun than the first, and Married With Zombies was pretty darn fun!
As Zombiebusters Inc., Sarah and David have already established themselves as the go-to zombie hunters for when you want the job done right. They’ve got a van they call the Mystery Machine, complete with Who Ya Gonna Call written on the back, which is a bit ironic, since there’s really no way to call anyone, anymore. The government’s response to the plague was to firebomb entire cities without checking for survivors, creating a wasteland of twisted metal and roving zombie hoards.
Flip this Zombie is told from Sarah’s POV, showcasing her sharp, sarcastic wit that’s only been even more finely honed from the first novel. Alongside her husband, she hacks and slashes her way through the zombie masses with glee (without breaking a nail, of course)! Business is good, but when they’re summoned to a job that calls for them to catch LIVE zombies, things take a turn for the worse. Then there are those super zombies running around…
Flip this Zombie is immensely readable,sometimes reminding me of What Color is Your Parachute (the one smeared with blood and zombie goo) or How To Succeed in Business (in Hell). There are some genuinely hair raising, creepy moments in this one, even moments of levity. With action that doesn’t quit, a mad scientist that claims he wants to save the world, bionic zombies, some of the funniest dialogue that I’ve read in a long time, and a twist that will leave you breathless,you won’t want to put it down!
Can Sarah and Dave save the world? Can they stay together long enough to save the world? You’ll just have to read Flip this Zombie to find out! What are you waiting for?

| Barnes and Noble
Read my interview with Jesse!
Visit the author at her website