Happy Monday! I’m super excited to announce the winner of my giveaway of Nightshade!

And the winner is…MINAS!
I’ll be sending you an email with the announcement! Please make sure and get back to me within 72 hours with your snail mail address!

Next up is something I do on my blog called Old School Monday. I’ll be listing a few reads from my library that aren’t new, but if you haven’t discovered them yet, you’re in for a treat!

First is War for the Oaks by Emma Bull 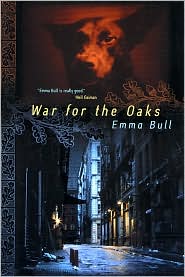 Eddi McCandry has just left her boyfriend and their band when she finds herself running through the Minneapolis night, pursued by a sinister man and a huge, terrifying dog. The two creatures are one and the same: a phouka, a faerie being who has chosen Eddi to be a mortal pawn in the age-old war between the Seelie and Unseelie Courts. Eddi isn’t interested–but she doesn’t have a choice. Now she struggles to build a new life and new band when she might not even survive till the first rehearsal.

Emma Bull was writing about Faerie before it was hot. This is considered a groundbreaking novel and it’s magic will pull you in and won’t let you go! 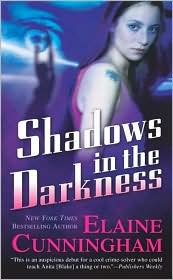 Gwen “GiGi” Gelman, a ten year veteran of the Providence, Rhode Island vice squad, finds herself unemployed after being blamed for a routine bust that turned into a bloodbath. GiGi is used to being on her own, though, and with the help of a DA who owes her, she’s scraped together enough capital to start her own PI business, specializing in”family problems”-in particular runaways who have disappeared into Providence’s seamy underside.
With a few custodian kidnapping cases under her belt, as well as a case against a Catholic school teacher/molester, Gigi is doing well for herself —until she takes on the case of a fourteen year old runaway who may or may not have been kidnapped.
As Gigi investigates, she accidentally opens the door to her own mystical past. Now long-hidden family ties threaten her, and the secret of her identity unlocks a conspiracy that reveals the forces of darkness that play in the shadows…
Forces that intend to be the masters of all mortal life.

Elaine Cunningham is an old hand at fantasy, and this was a bit of a departure for her. Followed up by Shadows in the Starlight, fans have been asking for more GiGi every since. I’m one of them!