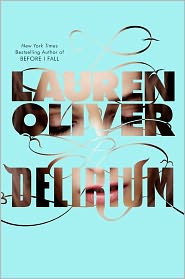 Ninety-five days, and then I’ll be safe. I wonder whether the procedure will hurt. I want to get it over with. It’s hard to be patient. It’s hard not to be afraid while I’m still uncured, though so far the deliria hasn’t touched me yet. Still, I worry. They say that in the old days, love drove people to madness. The deadliest of all deadly things: It kills you both when you have it and when you don’t.

REVIEW
I started reading Delirium with some trepidation.  One, I tend to be picky when it comes to YA,and two, the hype for this book has been out of this world. Delirium takesplace in a present day, alternate Portland, and the President and the Consortium has declared love to be a disease (amor delirium nervosa). The declaration was made 64 years ago, and a “cure” was discovered 43 years ago. Everyone aged 18 is given the cure, and that’s where we find our narrator, 17 year old Lena, on the cusp of her 18th birthday, and the promise of a “better” future. A future without love.

In Lena’s world, everything is assigned; schools, majors…mates.Romeo and Juliet is required reading…as a cautionary tale. There is actually an emergency toll-free line that can becalled if someone is suspected of contracting deliria. Regulators, groups of volunteer citizens and government employees, patrol the streets at night, looking for “uncureds” out aftercurfew. Without love, some parents find parenting distasteful, often killing their children, and the government constantly monitors communications, looking for keywords such as “love”, “Invalids”, or “sympathizer”. Invalids are sympathizers that live in the Wilds, the unregulated land that exists between recognized cities and towns. The borders of the US were closed 50 years ago and are now guarded constantly by military personnel. Sympathizers are summarily executed.
When a sympathizer group interrupts Lena’s exams, which will decide what her future will hold, she gets her first glimpse of Alex, and when they finally meet, Lena will question everything that she’s been taught, because Alex has a secret.
Lena is awkward and unsure of herself, describing herself as neither pretty nor ugly, and in her words, just short. She especially feels plain next to her best friend Hana, who is beautiful, and confident; everything Lena feels she is not. Lauren Oliver’s prose is smooth, lyrical, and sometimes brutal.  We are drawn into Lena’s worldof fear; fear of deliria, and also fear of being “cured”. As Lena struggles to cope with her family’s legacy, her war within herself, and her ultimate awakening, we are reminded of what itmeans to love, and be loved, how without pain, love would be meaningless, and how fragile we really are. Delirium took me back and made me remember what it was like to fall in love for the first time, to feel like I was I was drifting in a sparkling, clear blue sea, with no fear of drowning, and no wish to come up for air. When a revelation about Lena’s past is uncovered, she will question everything that she has ever known, about her mother, about herself, and make a decision that will change everything.

There were parts of this novel that chilled me, scenes that struck me to my core, sometimes moved me to tears, and made me realize how lucky we are to have choices; choices in life, education, friendships, and,perhaps most importantly, choices in love. The only thing missing, forme, is the big why of how love cameto be thought of as a disease. We’re given the obvious reasons: pay special attentionto the “quotes” at the beginning of each chapter from publications like “TheSafety, Health, and Happiness Handbook”, better known as The Book of Shh some are fairly disturbing), and Genesis: A Complete History of the World andthe Known Universe.However, I’d like to know what would make people wantto take away the one thing that really defines us as human beings, andsometimes gives us a reason to live in even the darkest times. Maybe in afuture novel?
With the recent influx of dystopian YA fiction, Delirium is a standout, not to be missed!