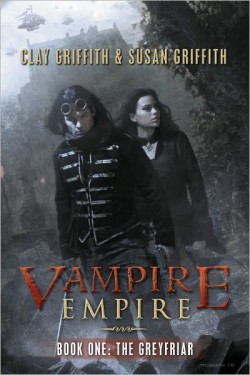 Synopsis:
In the year 1870, a horrible plague of vampires swept over the northern regions of the world. Millions of humans were killed outright. Millions more died of disease and famine due to the havoc that followed. Within two years, once-great cities were shrouded by the gray empire of the vampire clans. Human refugees fled south to the tropics because vampires could not tolerate the constant heat there. They brought technology and a feverish drive to reestablish their shattered societies of steam and iron amid the mosques of Alexandria, the torrid quietude of Panama, or the green temples of Malaya.
It is now 2020 and a bloody reckoning is coming.

Princess Adele is heir to the Empire of Equatoria, a remnant of the old tropical British Empire. She is quick with her wit as well as with a sword or gun. She is eager for an adventure before she settles into a life of duty and political marriage to a man she does not know. But her quest turns black when she becomes the target of a merciless vampire clan. Her only protector is the Greyfriar, a mysterious hero who fights the vampires from deep within their territory. Their dangerous relationship plays out against an approaching war to the death between humankind and the vampire clans.

The Greyfriar (Vampire Empire, Book 1) is the first book in a trilogy of high adventure and alternate history. Combining rousing pulp action with steampunk style, the Vampire Empire series brings epic political themes to life within a story of heartbreaking romance, sacrifice, and heroism.

Review
The year is 2020, and the world is in turmoil. In 1870, vampires launched a massive assault on humankind, taking over many of the northern regions of the world. Great cities fell, and progress was haulted while humankind strove to regain some foothold after the slaughter.

Princess Adele is empress-to-be of the Empire Equatoria, once a part of the old British Empire. She’s eager for adventure before she is to be married to an obnoxious American Senator, with the charming nickname “The Butcher of Bordeaux”, so named for his vampire killing prowess. During a tour in which she is to garner support for the hopeful alliance of America and Equatoria, her airship is attacked by a clan of vampires, during which she is rescued by the mysterious Greyfriar, a vampire killer of legendary cunning and stealth. Through circumstances beyond her control, she eventually falls into the hands of the evil Prince Dmitri, ruler of the once great city of London, now a necropolis and stronghold of the vampires. The Griffith’s description of a ravaged London is chilling, and I could almost smell the decay as I imagined walking through streets filled with the bones of the dead. What follows is a steampunk infused adventure that held me rapt until the last page!
I just loved the character of Princess Adele, who is strong, passionate, and spirited. She is a changed person by the end of the book and her relationship with the mysterious Greyfriar is tender and touching, but there is more to the Greyfriar than meets the eye. I also have to admit to a crush on Greyfriar. He’s probably one of my favorite characters to come along in a while. I’ll be waiting anxiously for the next installment in this series!
Purchase The Greyfriar: Vampire Empire: Amazon